Japan's August trade surplus widened to 743.2 billion yen ($6.5 billion). On an annual basis exports rose at more than twice the pace of imports, according to the latest data released by the Finance Ministry today. The surplus has nearly quadrupled - and increase of 287% - from this time last year.

At the same time shipments to both Europe and Asia rose to monthly records. The overall picture is however, a complex one. In the first place exports in July and August were both down on the June peak, as can be seen in the chart: 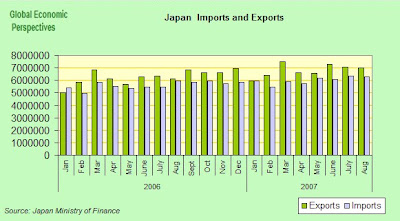 The big difference between July and August is that imports held up in June, while they dropped back in July. This is undoubtedly the impact of two factors, slowing domestic demand in Japan itself and fluctuations in energy costs. In fact petroleum imports did drop back from 1,137,199 million yen in July to 1,081,920 million yen in August, a drop of 55 million yen or so, or some 50% of the change in the balance.

In fact the monthly fluctuation in the trade surplus is not a very interesting or reliable data point at all (since it in part depends on fluctuations in earlier data), as the following charts will show. Firstly the chart for the monthly trade suplus since January 2006: 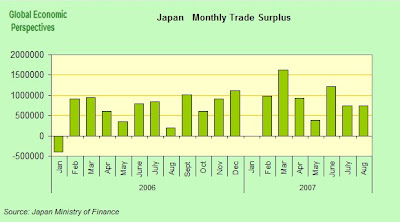 So as we can see, the August trade surplus was not particularly large at all, but experienced a fairly large annual increase due to the fact that the August 2006 surplus was very small. Economic data are full of anomalies like this.

The situation becomes even clearer if we look at the monthly year on year changes in the surplus since January this year. The anomalous nature of the August reading becomes even clearer, and we shouldn't take it as a reading on anything very special. 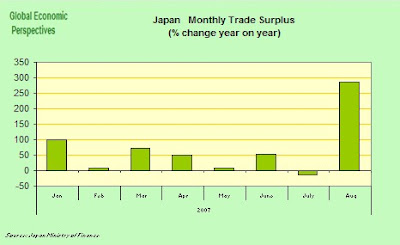 Now for some more interesting data. Exports to the EU, the US and China.

What we should note from this chart is that while exports to the EU have held up reasonably well since the start of 2007, and while they have been strong to China, exports to the US have been wobbling notably, which is understandable once you take into account the relative decline in the dollar (although not especially against the yen) and the fact that the US economy has itself started to wobble.

Another detail which is worth noting before I wind up, and that is that even while exports to China form a vital part of the Japan "recovery" panorama (they are now not that far short of direct exports to the US, and Japan will feel any slowdown in China ) Japan in fact runs a DEFICIT in goods trade with China. Here's the chart:

In this context it is interesting to ponder what might possibly happen if the yen were ever to appreciate notably against the Chinese yuan. At the present moment however this eventuality seems rather unlikely and the yen was trading at 114.91 per dollar at 12:34 p.m. in Tokyo up from 114.57 before the report was published, but still within an acceptable range from the Japanese export point of view.

At the end of the day, and given what we know about the Japanese economies dependence on exports the future evolution of the export data will be crucial for determining just how well the Japanese economy is able to weather the storm caused by cooling global economic growth following the financial turmoil associated with the crisis in the U.S. subprime mortgage market.

So going back to our charts, rather than simply reading Chinese tea leaves, my feeling is that we need to keep a close eye on the evolution of Japanese exports to those three big customers - the EU, the US and China - if we want to get an early indicator of whither the Japanese economy is headed at this point.
Posted by Admin at 1:20 AM