In the immediate light Edward's recent post here at GEM and my own re-post on Lithuania which features just below this one I am going to present a slew of graphs below on the Baltics which deals with the concept of crossover currency balance sheet exposure or as it has been coined in the literature; translation risk. The following definition is from investopedia.com:

Now, the first interesting thing which should be noted in the quote above is of course the notion of how 'companies' are emphasised. Now, I don't have a very broad overview of the literature on this topic but on the back of a superficial glance it seems clear to me that most of the words on this subject has been devoted to the description of companies' exchange rate risk of operating in foreign countries under insecure exchange rate systems and subsequently how this risk can be hedged using derivatives or just by calibrating the denomination of the stock of liquid assets held on the balance sheets. In this way, we need to look at another kind of translation risk and one which is especially important in the case of the Baltic countries and in fact also in many other countries in Eastern Europe. Simply put and as an inbuilt and strongly influential factor in connection to the general economic situation these countries have, as can also be seen from following the links above, seen a very rapid increase in credit/capital inflows in the past years to cover a ballooning negative external balance helped on its way by boom in domestic demand. The point is moreover that the majority of this credit has been extended to households through loans intermediated by foreign financial institutions and thus in foreign currency (mostly Euros). As an overall point the following point as quoted by a recent report by the World Bank is important:

External positions in 2Q 07 in most EU8+2 were financed by FDI. In the Baltic countries they were financed by foreign borrowing through the banking sector. In most countries current account deficits remain largely covered by FDI – fully in the Czech Republic and Poland, in 90% in Bulgaria and 2/3 in Slovakia and Romania. Meanwhile in the Baltic countries, which have the largest imbalances, FDI cover 1/3 of CAD in Latvia and Estonia and slightly more (58%) in Lithuania with banking sector foreign borrowing remaining the primary source of financing.

This last part is rather important for the analysis at hand which basically seeks to present comparable charts for the three Baltic countries according to the following overall analytical principles.

Now, and if I have been able to hold on to you until this point why don't take a look at the charts. We will begin with the charts showing the evolution of the external balances before moving on to charts showing the evolution of the stock of loans and finally finishing off with charts comparing the denomination of loans with the denomination of deposits in financial institutions. The charts which cuts across all the Baltic countries have been made with the explicit goal that they are comparable. It has not been a complete success but it works. 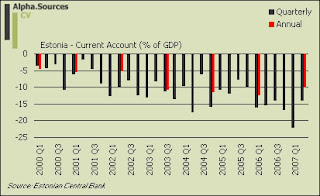 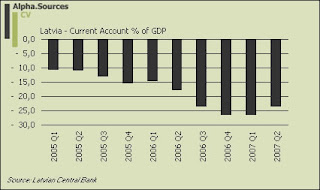 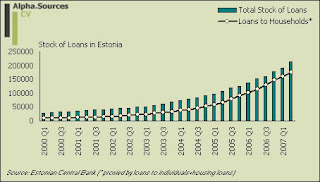 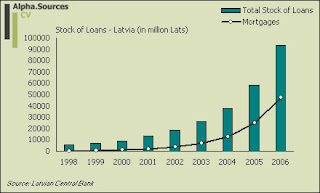 Stock of loans and deposits by currency denomination (Estonia and Latvia) 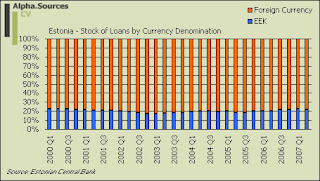 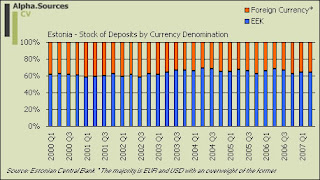 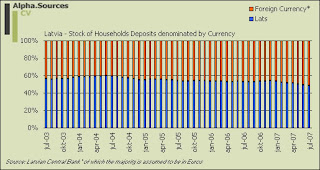 I won't say a whole much at this point save of course to point out that the charts above do indicate that a considerable amount of translation risk is present which also conforms with the rather large amount of anecdotal evidence.