Japan Retail Sales October 2007, the Employment Outlook and the Arrival of the Topix Bear Market

Japan's retail sales rose at the fastest pace in more than a year in October as consumers bought new-model cars and record gas prices increased revenue at filling stations. Sales climbed 0.8 percent in October from a year earlier, and this constituted the third monthly gain, according to the Ministry of Economy, Trade and Industry in Tokyo this morning. Well, that's the headline news, and here's a slightly longer term chart. 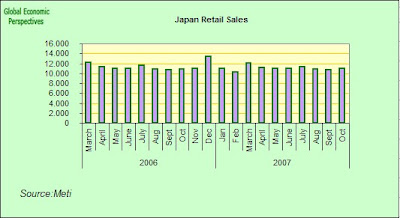 As we can readily see, there is nothing especially impressive about Japan's recent retail performance, and only in Japan would it be headline news that sales had managed to eke out a 0.8% y-o-y increase (sales rose by only 0.3% in 2004, by 1.2% in 2005, and actually fell by 0.2% in 2006 - the highpoint of the latest expansion - a little detail which helps put some of the recent y-o-y increases in perspective, since in many cases we are only recovering 2005 levels). So I think we need at the very least to be rather cautious here about the extent to which this "surge" in consumption is going to do much to offset the sharp reduction in Japanese housing starts, and declining export sales to the United States. Add to this the looming fiscal tightening reported on earlier in the week and it is hard to see on which of its various weakening legs the Japanese economy is now going to stand (interestingly enough the cabinet office publication referred to below states that the "Acceleration and deepening of reforms will hereafter be pursued based on the 'Economic and Fiscal Reform 2007'" which means watch out for either a consumer tax or a reduction in public spending as the next key arm in the reform process).

In fact, and in far more realistic vein, the Japanese government this week cut its assessment of the job market for the first time in more than three years, calling into question in the process one of the central bank's key arguments for raising interest rates. "Job-market conditions continue to be difficult and there has been a pause in improvement" the Cabinet Office said in its monthly economic report for November, following a rise in the unemployment rate for two consecutive months. The unemployment rate climbed to 4 percent in September, up from the 3.6 percent registered two months earlier. The total number of employees fell 0.7 percent in September, while the number of workers at companies with five or more people increased 0.3 percent.

On top of this wages, far from rising earlier in the year as the labour market tightened, have declined in nine of the last 10 reported months and mid-year bonuses, which constitute about 10 percent of a worker's annual income, dropped this summer for the first time in three years.

However, such "minor adversity" notwithstanding, the Japanese government does still feel bold enough to keep to its overall view that the economy, now in its 70th month of expansion, is in the process recovering.

The Cabinet Office also reiterated its view that the "market turmoil" caused by the U.S. housing recession, yen appreciation and higher oil prices are risks to growth. Crude oil rose above $99 a barrel for the first time last week and has gained 59 percent this year. Concern about possible sudden upward movements in the yen-dollar cross continues to be widespread. The Financial Times this morning quotes the following view, which must be reasonably representative of sentiment in Japan:

Masaaki Kanno, chief economist at JPMorgan in Tokyo, said a strengthening yen clouded the picture. If the yen broke through Y100 or Y90 to the dollar, he said, it could "be a big blow to the economy" and once more raise the spectre of deflation. "In the past we didn't worry so much about yen strength as we believed the global economy would grow steadily," he said. "But if the strong yen is caused by the slowing of the global economy together with the spread of risk aversion, then probably we should be a bit more worried than before."

Claus has a fuller discussion of the issues which might be raised by any possible Japanese intervention to restrain the yen's rise on Japan Economy Watch (here).

But it is not only the Japanese government which has been pulling back its expectations, the Bank of Japan, in the shape of Bank Governor Toshihiko Fukui has also been expressing his strong concern about the ongoing turbulence in world markets, comparing it with “a serious disease”. Fukui is quoted as saying that the volatile movements in financial markets since July suggested global markets were paying the price for “euphoria and excessive risk-taking”. It was the central bank’s job, he said, “to help markets adjust themselves in an orderly manner as far as possible, while keeping markets functioning at all times.” Up to now, and despite the fact that the bank has fractionally pared-back its growth and inflation predictions for 2007, it has by-and-large stuck to its central thesis that Japan’s economy remains in a virtuous cycle. But with every passing day this view becomes more difficult to sustain, and market participants are growing more pessimistic by the day about the likelihood of any further interest rate increases from the BoJ in the foreseeable future.

Meanwhile Japanese shares have been falling . The Nikkei slid 69.07, or 0.5 percent today, falling to 15,153.78 at the close of trading in Tokyo. The move down was led by the Sumitomo Mitsui Financial Group Inc., after Wells Fargo announced a $1.4 billion pretax charge tied to increased losses on home equity loans. Shares also declined after the announcement yesterday that U.S. consumer confidence fell more than expected in November and housing prices dropped the most since at least 1988, pointing to weaker demand in what is still Japan's biggest overseas market.

Japan in fact recently had the honour of becoming the first of the world's 10 biggest stock markets to enter a bear market since the U.S. subprime-mortgage collapse, since the Topix index last week registered a cumulative 21 percent decline from its 2007 peak. The 39-year-old Topix, which constitutes the broadest gauge of Japanese equity prices fell 0.1 percent on Nov 22 to 1,437.38, in so doing reaching its lowest level since October 2005, and this was 21% down from this year's highest close of 1,816.97 achieved on Feb. 26. The Topix benchmark has in fact fallen 14 percent since 1 January 2007.

Uncertainty and volatility abound everywhere at the moment, and today we have also learned that China has now followed Japan into bear territory, since the CSI 300 Index (which tracks 300 yuan-denominated stocks) fell for the third consecutive day losing 62.40, or 1.3 percent, and closing at 4,648.75, its lowest value since Aug. 17. Todays value also represents a decline of 21 percent since from the record high registered on Oct. 16. A 20 percent drop within 12 months is widely interpreted as signaling entry into a bear market, although what quite represents what these days is in fact anyone's guess. Still, this is a very, very rapid turn around indeed, and things now need watching very carefully.

Now, as is generally known, bonds typically move in the opposite direction to stocks, and the present juncture is no exception to this little rule, since yields on Japan 10-year government bonds have been showing a correlation of 0.96 with the Nikkei this month, according to data compiled by Bloomberg. And a value of 1 would mean the two moved in complete lockstep.

So true to form Japanese government bonds rose again yesterday as investors continue to be nervous about the possibility of a quick resolution to global credit problems (and the announcement yesterday from the ECB that they are about to inject a further €30bn ($44.3bn) in one-week funds into the banking sector will hardly be making them less nervous). The rise in JGBs followed a sharp decline on Tuesday which accompanied the release of the news that Abu Dhabi Investment Authority, currently the world's biggest sovereign wealth fund, was planning to inject $7.5 billion into Citigroup Inc. Citigroup has been one of the banks which has been hardest hit by subprime mortgage sector problems and the consequent credit crunch. What is most striking about all of this is the volatility we can see everywhere at the moment.

JGB futures have recently risen to their highest since January 2006 - and yesterday ended the session up 0.21 at 137.10, close to last weeks 22-month high of 137.53 - as the global financial market problems and the steady trickle of negative news from Japan have sustained doubts over whether the BOJ will lift interest rates to 0.75 percent from the current 0.5 percent before the end of Japan's fiscal year in March. The 10-year yield
Posted by Edward Hugh at 3:39 AM