Another Bad Friday in Budapest

Oh why is it always Friday, we may ask ourselves, that things get choppy in Budapest! I say this since in each of the three last weeks the greatest pressure seems to come on HUF denominated instruments on a Friday. This morning "efficient cause" was the release by Standard & Poor's Ratings Services of a revision to its Hungary outlook on Hungary to ‘Negative' from ‘Stable' reflecting the “weakening perspective for sustained consolidation of public finances".

“We believe that the increasing political incentives and pressure to dilute the fiscal reforms ahead of upcoming elections, coupled with the increasing cost of external borrowing, will interrupt Hungary's progress in reducing its deficit from 2009 and will keep the debt burden rising," said Standard & Poor's credit analyst Frank Gill.

They argue that political opposition to budgetary reform is increasing and cite - obviously, whoever could have thought otherwise - the results of the 9 March referendum which reflected a weakening in the government's mandate a large majority of Hungarian voters rejected highly sysmbolic aspects of the package.

“The defeat will not meaningfully increase this year's budget deficit but it nevertheless confirms fading appetite among Hungarians to continue with the consolidation process. The recent ill-timed announcement of various tax-cutting proposals for 2009 (ranging from 0.7% to 1.4% of GDP) point in the same direction. Moreover, the possibility of new opposition referenda, which amount to votes of no confidence in Prime Minister Gyurcsány's fiscal reform plan, will further undermine the government's goal of reducing public sector debt dependency"

S&P sees important dangers of slippage in Hungary's public sector deficit reducing programme, with the deficit only coming down to 4.5% of GDP this year (while the government target is 4%) from an estimated 5.7% in 2007 and a massive 9.2% in 2006. More importantly, S&P forecast that budgetary deficits will remain unchanged in 2009 and 2010. The cabinet's agreed aim is to reach a deficit of 3.2% of GDP next year.

Hungary's Finance Minister János Veres dived straight into the fray this morning asserting that Hungary's public sector deficit will drop below 4.0% of GDP this year and that the government has no intention of changing its deficit reduction path set out in 2006.

Personally I think it is very hard to put firm numbers on future budget deficit outcomes before we know the future path of Hungarian GDP growth (and it is noteworthy that Fitch Rating analyst David Heslam has come straight out today and said he thinks this year's deficit target can be met - long live competition between the agencies!). At the present time it is clear that the main risks are all downside, and in this context S&P's general slippage concerns would seem to be entirely justified. What this means is debt to GDP could rise even further, and S&P project a ratio of over 68% of GDP in 2010. In this context the following warning is an important one:

"Lack of a clear perspective for stabilization could eventually lead to a downward revision of the ratings, which would risk undermining investor confidence and could severely hamper Hungary's ability to refinance itself"

This warning should be taken very seriously by all those countries (like Italy) with rapidly ageing populations and important structural problems in achieving fiscal balance.

The Standard & Poor's revision was also commented on in Brussels by Hungarian Prime Minister Ferenc Gyurcsány, who said the change in credit outlook will cost the country billions (of forints). Gyurcsány said the credit rating agency became concerned after the outcome of the 9 March referendum, saying that it considerably diminished chances for Hungary to put in place the necessary structural reforms. This reaction is hardly surprising since Gyurcsany would obviously like to make political capital from it by making the point that it is the initiators of the referendum who are to be blamed for the outlook revision. Political gameplaying it may be, but that doesn't make his point any the less valid, I think.

To the already existing gloom was added the impact of Hungary's final adjusted output figures which showed that industrial output inched up by 1.0% month on month in January, according to final figures adjusted seasonally and by working days, the Central Statistics Office (KSH). This rate was a downward adjustment from a preliminary 1.3% growth reported earlier. The month on month increase in Dec 2007 was also 1.0% (adjusted upward from 0.9%). So while the short term performance is far from a disaster (although clearly not sufficient to pull forward the now export dependent Hungarain economy) since output volume has risen now for the third consecutive month, today's detailed figures do paint a very gloomy picture on the extent of the likely future deceleration of growth. Total new orders for industrial products were down 2.5% year on yearr in January. New exports orders were up 0.8% year on year, but domestic orders slumped by 11.9%. Total orders dipped by 9.2% year on year. Since Hungary is so highly interlocked with Germany, and further slowdown in the German economy will be sorely felt in Hungary. 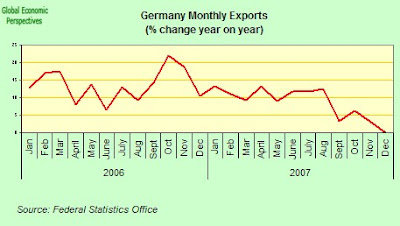 The response to all this gloom wasn't long in arriving since the forint was back down in 260 to the euro territory falling 0.6 percent to 259.97 per euro, after trading at a two-week high of 257.07 earlier, up from 258.48 late yesterday. Today's trading follows a very volatile session on Thursday (euro/HUF even reached 262 at one point), and the rapid rise in the yield curve at the long end ( with 10-yr bonds going at auction with an average yield set of 8.62% - up 115 base points on the previous auction of the same instrument) seems to be attracting investors, although evidently yields are now likely to be stuck at these very high levels.
Posted by Edward Hugh at 2:38 AM