Unemployment in Germany rose last month for the first time since February 2006, thus bringing inauspiciously to an end an unprecedented 34 month labour-market recovery. Figures released by the Federal Labour Agency today show that the number of those seeking employment in Germany rose by a seasonally-adjusted 18,000 in December. The change is small, but the significance is great, since this is obviously but the first month of many when unemployment will rise in Germany, and this rising unemployment will now, in its turn, feed back into the industrial slowdown which is already underway. The seasonally adjusted unemployment rate remained unchanged (following data revisions for previous months) at 7.6 percent.

Not a surprise. But not good news. 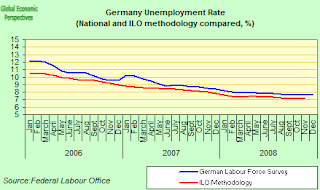 In a separate release the Federal Statistical Office reported that the number of persons in employment living in Germany was 40.83 million in November 2008 - up by 500,000 persons on the same month a year earlier. However, the relative increase (+1.2%) was the lowest rate of growth since December 2006. In January 2008, the relative increase compared with a year earlier was 1.7%. So the economic downturn is finally beginning to show up in the labour market, too.

The reasons for the uptick in German unemployment are not hard to find, since German exports fell back at a record rate in November - in fact seasonally and working day adjusted current-price sales exports fell back 10.6 percent from October (when they declined 0.6 percent), according to the latest data from the Federal Statistics Office. This is the biggest monthly drop since records for a reunified Germany began. November exports dropped 12 percent year on year, while imports fell 5.6 percent on the month and 0.9 percent from a year earlier. The trade surplus (which is the key consideration when it comes to GDP growth) narrowed to 9.7 billion euros from 16.4 billion euros in October, and almost half the April rate of 18.8 billion euros. The current account surplus was down to 8.6 billion euros. 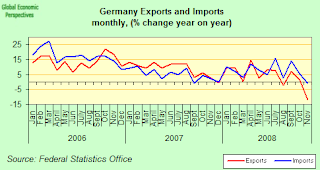 The immediate future looks even worse, with the latest data from the Technology Ministry showing new orders fell 27.2% (on aggregate) in November (as compared with November 2007) following a 17.5% annual reduction in October, while export orders fell back 30% year on year.

German Bonds Getting Harder To Sell?


And problems with indutrial output, emplyment and exports are not the only difficulty facing Germany, since a sale of 10-year bunds yesterday lured the least demand in six months as investors began to show increasing nervousness in the face of the coming flood of government securities, raising the prospect of increased borrowing costs across the European economies.

Investors bid a total of 5.2 billion euros for the bonds on offer, illustrating a reluctance to purchase which prompted the Bundesbank to retain some 32 percent of the securities. Germany in fact sold 4.1 billion euros of its 3.75 percent securities due January 2019 at an average yield of 3.12 percent. The government had planned to sell 6 billion euros of the notes, and the last time the Bundesbank retained such a large share at an auction was on July 2 2008, when it held 2.384 billion euros, or 34 percent, of a planned 7 billion-euro sale.

The situation is far from critical, of course, but the prospect of having to pay more to raise funds will surely not be far from Angela Merkel's mind when she meets in Berlin tomorrow (Friday) with leaders of Germany’s Mittelstand (the association of small and midsize companies) to discuss the establishment of what is reported to be a 100 billion-euro fund to help companies who are currently struggling to obtain credit.

European governments want to raise money to finance more than $96 billion in bank bailouts and stave off the worst of the global recession. France may sell 7 billion euros of bonds tomorrow and Ireland began marketing five-year debt today. Spain is also planning a sale. Nor will it be absent from her thinking when she meets with leaders of the governing coalition on January 12 to hammer out the details of a second economic stimulus package which is reputed to be valued between $40 billion and $50 billion. The pit here is evidently not bottomless.

Really the problem is not an especially German one, since according to estimates from analysts at Societe General eurozome governments are now set to issue about 20 billion euros of bonds every week throughout the first quarter of 2009, up from an average of 10 to 15 billion euros a week during the past two years. The U.K. is also planning an unprecedented 146.4 billion pounds of debt sales in the fiscal year ending March 31.

What the weak demand surely does indicate though is that longer term interest rates may well be driven higher by the proposed sales (since German bunds tend to serve as a benchmark), a development which would not be welcome given the strength of the recession that Europe's economies face. Some indication of the kind of problems that this is likely to lead to elsewhere can be found in the report in today's Financial Times that the Greek government just sacked its finance minister amid concerns about the evident deterioration in government finances. The FT reports that there is a consensus among analysts that the budget deficit is set to exceed by a significant margin the 3 per cent of gross domestic product limit set for eurozone members already in 2008.


The Germany economy contracted by 0.5 percent in the three months from July to September. The Bundesbank said in December that it is likely to shrink for a third successive quarter in the last three months of 2008 and will start 2009, and according the Frankfurter Allgemeine Zeitung, citing a leaked Economy Ministry forecast, may contract by up to 1.75 percent. This number does not look unrealistic if we look at the data we have from the services and manufacturing PMIs and we consider that there was a huge (0.9 percentage points of GDP) inventory build up in the third quarter which will very probably be unwound in the fourth one.

In fact a sharp drop in orders sent Germany's manufacturing sector into its biggest contraction in more than 12 years in December. The headline index in the Markit Purchasing Managers' Index (PMI) for Europe's biggest economy fell to 32.7 in December from 35.7 in November. The reading, which showed a sector contraction for the fifth month running, was the lowest since the series began in April 1996, while the sub-index for new orders also fell to a series record low. 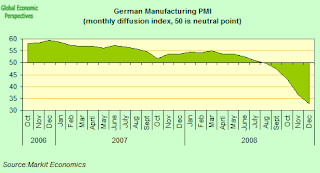 And while the services sector has been performing rather better, or if you prefer contracting rather less rapidly, the fourth quarter still marks a sea change, with activity contracting in each of the three months. 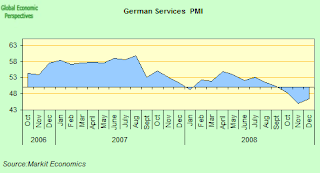 And the outlook for 2009 doesn't look any brighter, with the Bundesbank expecting the economy not “to pick up again until the projected global economic upturn in 2010.” The Kiel-based IfW expect the German economy to shrink by 2.7 percent next year, and this is now the most pessimistic (but possibly the most accurate) prediction made by a leading German research institute. The German government seem to be moving in the same range as IfW, and have reached the conclusion that the economy may shrink by at least 3 percent next year, which would be a post-World War II record, according to the Frankfurter Allgemeine Zeitung leak. So far the ministry have only acknowledged that “The government is currently working on its economic forecasts for 2009 and these will be released on Jan. 28”. So we will need to wait till the end of January to hear the "official version".