The German economy, Europe’s largest, unexpectedly returned to growth in the second quarter, technically bringing an end to its worst recession since World War II. The euro climbed 0.2 percent to $1.4248 on release of the report.

But don't get carried away just yet, since while gross domestic product rose a seasonally adjusted 0.3 percent from the first quarter, when it plunged 3.5 percent, the most since quarterly data were first compiled in 1970, compared with Q1 2008 Compared with the second quarter of 2008, the price-adjusted GDP product was down 7.1%, while after adjustment for calendar variations, economic performance decreased 5.9% on a year earlier as the quarter had three working days less than the same period of the previous year. 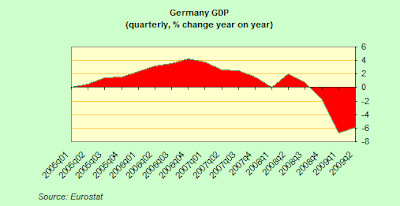 Household and government final consumption together with capital formation in construction (government infrastructure spending) all exerted a positive impact compared with the previous quarter. As price-adjusted imports declined far more sharply than exports (that is the trade surplus rose), the balance of exports and imports also had a positive effect on GDP growth. However, declining inventories continued a negative effect on growth, and this suggests that optimism is not that ebullient, since otherwise people would be stocking up getting ready to sell.

Employment continued to fall, and there were 40.2 million people in employment in Q2, which was a decrease of 25,000 persons or 0.1% on a year earlier.

The Federal Statistical Office will release detailed results for the second quarter of 2009 on 25 August 2009, and we will be able to see the complete picture a little better then. 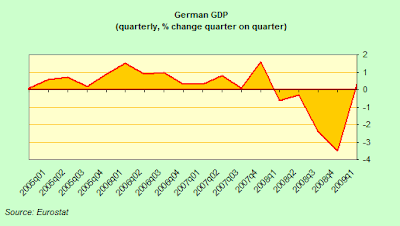 Germany's private sector contracted at its slowest pace in 11 months in July and was close to breaking through into growth.

Final figures for the Markit purchasing managers index (PMI) showed the headline composite measure of business activity rising five index points to 49.0 in July from 44.0 in June -- closing in on the 50 level that separates contraction from expansion.

The composite index covers both Germany's manufacturing and service sectors. The headline PMI for the service sector rose to 48.1 in July from 45.2, just below the flash estimate of 48.4.

However, it is clear there will be a before and after the German elections (next month) here, and my forecast is for a further contraction, possibly 0.5% q-o-q in Q3 (looking at the PMIs) as the impact of the stimulus wanes, and exports get stuck more or less around the present level. A long hard road lies ahead. 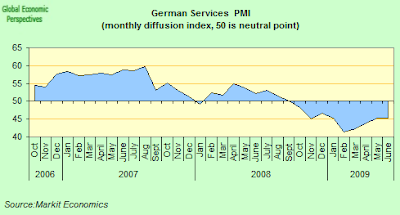 Germany's battered industrial sector contracted at its slowest pace in 10 months in July, and orders and output grew for the first time since last summer. The Markit purchasing managers' index (PMI) of activity in the German manufacturing sector rose for a sixth month running and by the biggest amount in the survey's history to hit 45.7. This is still, however some considerable distance from the 50 expansion threshold. 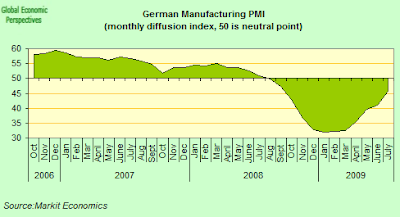 German exports swang backin to solid growth in June, surging by 7 per cent in June, optimism was also boosted by a 4.5 per cent rise in industrial orders in June - powered almost entirely by export orders. 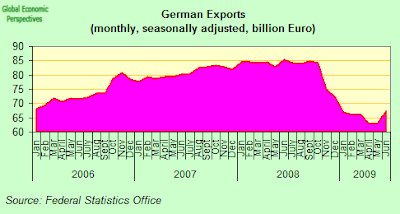 On the other hand, industrial production output numbers for June, tempered hopes for a further rebound, since they fell back 0.1 per cent compared with the May’s figures which were revised up to show a 4.3 per cent rise in production over April. The strongest performing sectors in recent months have been those producing investment goods and “intermediate” products, shipped for completion elsewhere. 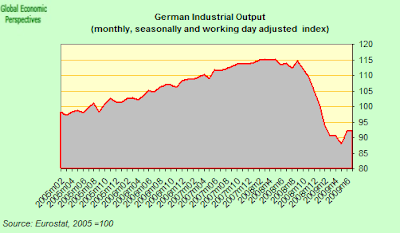 Consumer and Business Confidence On The Rise


German IFO business climate came in at 87.3, higher than the 86.6 expected and the 85.9 reading in June. IFO economists continue to be optimistic as the economy is gradually stabilizing. The expectations component rose for the eighth consecutive month to 90.4 from 89.5 in June. The current assessment component also increased to 84.3 from 82.4 and above market forecast of 82.8. 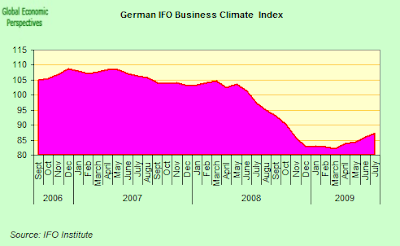 Consumer confidence also continued it upward trend in August with the GFK forward looking indicator forecasting a value of 3.5 points for August 2009, following a revised value of 3.0 points in July. Over a longer term comparison however, the consumer climate is still at a very low level. 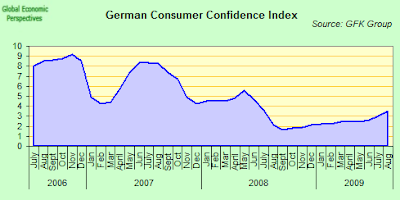 German investor confidence on the other hand fell back in July, although since the impression has been that investors may have been getting ahead of themselves, then this correction is not entirely unexpected. The ZEW index of investor and analyst expectations, which aims to predict economic activity six months ahead, declined to 39.5 from 44.8 in June. 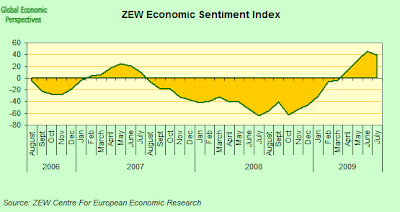 
Domestic demand remains very weak, and retail sales dropped for a secondconsecutive month in June as rising unemployment prompted consumers to cut back their spending. Sales, adjusted for inflation and seasonal factors, decreased 1.8 percent from May when they fell 1.3 percent. From a year earlier, sales decreased 1.6 percent. As can be seen in the chart, German retail sales have been in decline since 2006. 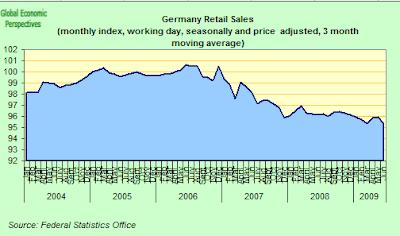 Employment Falls And Unemployment On The Rise

The German job machine ran out of steam last autumn, and since that time has been adding jobs at an ever slower pace. Now it has turned negative, and less Germans are employed every month than they were a year earlier. 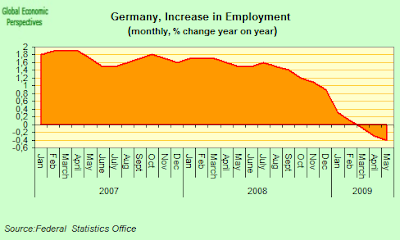 German unemployment rose again in July. The number of people out of work increased 52,000 to 3.46 million on an unadjusted basis. The seasonally adjusted total actually fell by 6,000, according to the statistics office due to statistical changes. Without the impact of the changes, the office estimates unemployment rose by 30,000. German unemployment began to increase in November after falling steadily for more than three years. The seasonally adjusted jobless rate was unchanged at 8.3 percent in July. 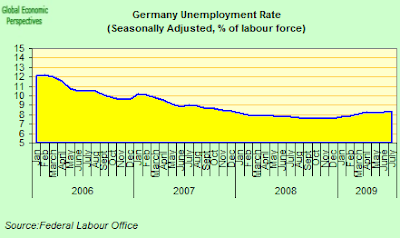 The German consumer price index declined by 0.5% in July 2009 over July 2008, raising new deflation concerns. Germany as a whole has never seen such a low inflation rate has not been seen since German reunification, while for the former territory of the Federal Republic, a similar rate was registered in spring 1987. In the preceding months of June and May 2009, the rates of price increase were +0.1% and ± 0.0%, respectively. Compared to June 2009, the consumer price index remained unchanged (±0.0%).

The harmonised consumer price index (HICP) for Germany, which is calculated for European purposes, declined 0.7% in July 2009 over July 2008. 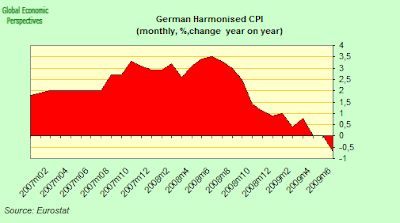 The index of producer prices for industrial products (domestic sales) for Germany fell by 4.6% in June 2009 from the corresponding month of the preceding year. This was the lowest year-on-year-rate since December 1968 (–5.0%). In May 2009, the annual rate of change was –3.6%. Despite the fact that much of this fall in prices is due to falling food and energy costs, the ongoing excess capacity in the economy, and the mounting unemployment will maintain the deflationary pressure. My view: Germany has entered deflation, and it is far from clear when she will leave. 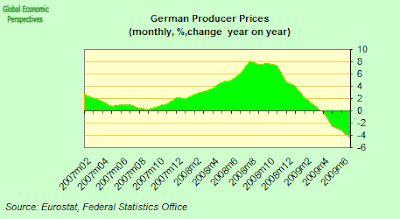 In fact the German economy will never recover on the back of domestic demand, which is weak, and tends to lag behind movements in exports and in GDP. So really a full fledged German recovery must await recovery elsewhere, and in the meantime we are left with simply marking time. 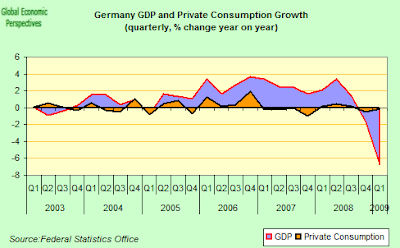 Bottom line, this is as much of a statistical recovery as anything else at this point. After the election the new German government will need to address fiscal deficit concerns, undermining the fragile growth, and my current forecast is for a further 0.5% contraction in the third quarter, and a 7% fall in 2009 as compared with 2008.
Posted by Edward Hugh at 4:42 AM