There are many theories out there about what the actual causes of global economic and financial imbalances are. In differing degrees, analysts point the finger at a profligate US, or a lack of domestic demand (i.e. or excess savings) in East Asia and parts of the EU. Others point to the structural drivers of imbalances. ICT innovation and the expansion of international trade and finance are both deemed as being responsible (at least partially) for the current state of affairs. The consensus is that these imbalances cannot persist and that some corrections are in order – a rise in the value of the yuan, a fall in the dollar, a reduction in available liquidity, etc. In general, there is a prevailing view that, on account of the massive size of the US current account deficit (estimated as reaching -6.7% of GDP in 2006), what is happening now is unprecedented and a direct consequence of globalization.

However, over the past few years, another more-familiar and sinister force has been exacerbating the impact of all the factors listed above: namely, rising oil prices. Driven by increasing geopolitical angst in the Middle East, sporadic capacity constraints, but mostly by the increasing demand in fast-growing Asia – energy prices have increased almost 2.5 times between 2002 and 2006. In the US, where the average American consumes the equivalent of 25 barrels of oil each year (total consumption is about 7.5 billion barrels per year), this has meant an increase in the trade balance for oil – a major component of the US current account. On the other side of this equation, oil exporting states have by-in-large enjoyed large trade surpluses, and the petrodollars they have ‘earned’ have been invested largely in dollar-denominated assets. (Of course, sizable chunks have also been used to finance domestic real estate development, and sadly, the radical Islamists fighting America.)

Almost simultaneously, China has been on a mercantilist tear – constantly increasing its dominance of the global manufacturing industry. Large US dollar purchases have allowed China to keep the yuan low and exporting industries competitive. The dollar purchases have fueled low interest rates and consequent high consumption growth in the US, resulting in a rapidly increasing bilateral trade deficit.

Over the period, the US current account deficit went from 4.5% of GDP to 6.6% (2006 numbers have been estimated using data up till Q3 2006) – a deterioration of about 2%. What we can see clearly in the chart above is that oil prices were responsible for more than half of that – or about 1.1% of GDP. We can safely assume that prices alone were responsible because oil consumption did not increase much over the period – only about 1% annually. We can also see in the chart that the trade deficit with China worsened by about 0.8% of GDP – from about $100 billion in 2002 to $235 billion today (2006 number estimated using data up till November 2006). When we net out these two components of the current account, we can see that the balance on all other items worsened by only ~0.2% of GDP over the period. Clearly, the additional money that Americans have borrowed from abroad over the last few years has been used mostly to fund purchases of two things: more expensive gasoline, and more cheap goods from China.

There are also good reasons to believe that on both fronts, we may soon see a moderation in the impact on the current account. Oil prices have eased to about $55 a gallon - $5 lower than their 2006 average. Assuming stable growth in consumption (1% CAGR) and net imports, and using the conservative assumption of 5% nominal GDP growth, we can say that for every $10 reduction in the average annual price of oil, we will see a 0.35% (of GDP) improvement in the current account deficit. To put this in perspective, other things staying the same, an oil price of $40 would imply a current account deficit less than 6% of GDP. While it might be optimistic to think this achievable this year, it seems plausible (though, in my opinion, not as yet probable) that this level can be achieved in the near future – given the recent boom in alternative energy and the push towards consolidating gasoline consumption. (This push can be seen most recently in last night’s State of the Union address with President Bush calling for a 20% reduction in gasoline consumption over the next decade.)

The trade balance with China, of course, is far more complex and unpredictable. The yuan edged up a tiny bit against the dollar last year. In the short term, this raises the cost of imports and exacerbates the deficit. However, over time, it raises the relative competitiveness of American goods and the bilateral imbalance should decrease. This year is sure to include some rumblings from the Department of Treasury about China revaluing up or moving to a managed float. And we might see some token moves from the PBOC – most likely in advance of high profile political events. However, in the end, it might be China’s own domestic imperatives that lead it towards stemming its dollar purchases and the resultant currency peg. Having acknowledged the need for a greater role of domestic demand in economic growth, Chinese leaders should now move gradually towards loosening domestic capital controls – which will mean a slower flow from the ‘savings glut’ into dollar-based securities. The yuan will rise, albeit slowly.

To be sure, recent productivity gains and continued foreign interest will keep Chinese manufacturing competitive – and the impact on the US-China trade balance will be neither immediate nor dramatic. But it seems reasonable to assume that when combined with slowing consumption in the US, we might see it stabilize, and perhaps even drop down a couple of notches.

The current debate about the driving forces behind these imbalances is largely focused on defining the global context under which they have emerged. However, the more important question to consider should be: what is so unique about them now? Because aside from the academic aspect of it, the fundamental question of imbalances is about their sustainability. It is a very fine line, but the operative question to consider should not be ‘Are current imbalances unsustainable?’—but ‘What level of imbalances are, in fact, sustainable?’

The chart below, which examines the current account balances of 150 countries over the past 25 years, paints a conflicting picture. On the one hand, if we look at the average current account balance across all countries, we see that what we are seeing now is nothing new. In the early 80s and 90s, average balances rose to over 8% of GDP – much like today. However, once we weight these individual balances by the countries’ GDPs, we see a different picture. When we look at the sum of the absolute values of these current account balances as a proportion of world GDP, it is quite clear that, this time around, something is quite different. Through most of the late 80s and 90s, this number hovered around 2%. Since 2000, it has risen to over 4% – no doubt powered by the massive deficit in the US, and the concomitant surplus in China. 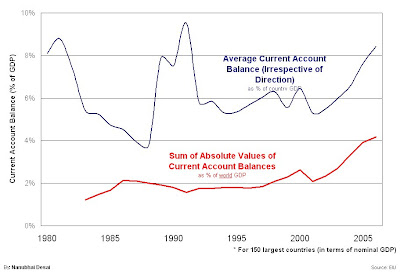 Though the weighted-measure is undoubtedly a more judicious way to account for imbalances at the global level, it does not mean that average balances are irrelevant. In the chart below, one can see a close correlation between the average level of global imbalances and oil prices (the correlation coefficient is 0.47). Quite clearly, the levels of current account balances worldwide tend to rise and fall with energy prices. 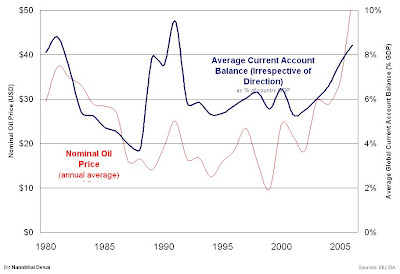 In my view, the driving forces of global imbalances today are a mix of the ‘old’ and the ‘new’ – of the familiar and the unfamiliar – with each having a relatively equal role. High energy prices are the driving force of much of the imbalances today; but they are helped by another seismic structural change – the rise of China. Neither force is likely to be as strong in the next five years as it was in the last five, so it seems plausible that the imbalances could unwind a bit – with the US current account deficit coming down to 4.5%-5.5% of GDP by 2010. The question going forward is whether even that level can be sustained indefinitely. For now though, we should be content in knowing that returning to 2002 levels may be within the realm of possibility.

(Links to related articles are forthcoming)
Posted by Nanubhai Desai at 4:20 AM