Rising water in the tank

That was Tarisa Watanagase, governor of the Bank of Thailand, in an interview in Bangkok last week. She reminds us to look at the bigger picture rather than get detracted by the central bank’s awkward attempt at stemming the inflow of capital last month.

Now Dr Watanagase was also the deputy governor of the central bank back in the early 1990s, a time when the management of monetary policy became exceedingly problematic in the face of surging capital inflows. Perhaps she’s feeling a tinge of déjà vu.

So the Bank of Thailand has to deal with almost twice the amount of inflows as at its peak in the 90s. Look at the graph below. It shows the sharply divergent trends between net foreign assets and the monetary base in Thailand (data up till November 2006), suggesting the growing magnitude of the central bank’s task in managing monetary policy. 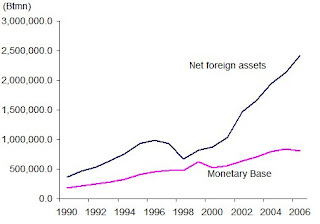 To be sure, there are few signs that the Thai economy is suffering from the excesses of the mid-90s. At its peak back then, bank loans were 1.4x deposits – fueled largely by lending in foreign currencies. Today, outstanding loans remain less than deposits.

So you may fault Dr Watanagase for being too quick on the trigger.But the problem of monetary policy management is real, and likely to grow. For what if capital inflows into Thailand (and Asia) are still closer to the start of a trend than nearer its end?

How you view this would depend on your take of the global savings glut and whether it will persist. Here I shall simply refer readers to Claus Vistesen’s excellent post if you have not already read it. In particular, the intriguing question over what is driving the excess savings.

Also, bear in mind that it’s not just the size of the savings glut that matters, but how it’s allocated. And more likely than not, surplus funds will be increasingly targeted at Asia. It is where the brightest growth prospects are.

Now these may all add up to exciting times, but Asia’s monetary authorities could find their hands full when, once again, they confront the ‘Impossible Trinity’ - a hypothesis in international economics which argues that trying to manage the exchange rate while simultaneously maintaining an independent monetary policy in the face of free flowing capital is next to hopeless.

Asia’s developing economies may be increasingly tempted to look in the direction of capital controls for a way out. That is, to remain open, they could find justification in needing to close themselves from time to time.

This is not a satisfactory solution for sure; and not just because it is not easy to restrict the movement of capital without threatening to stifle international trade as well.

There’s another problem. Viewed from the big picture, which is the vantage point Ms Watanagase reminds us to take; such ad hoc measures could merely end up shifting the problem. Picture trying to stop an overflow of water in a tank by blocking the spillage in one direction – it simply diverts the water, in greater amount, onto another path.

So, awkward as Ms Watanagase’s ‘misadventure’ may be, she is quite right to say, “the world needs to talk and find a more balanced way, a more effective way of dealing with the situation.”