The Hard, Fast and Permanent Rules of Carry Trades


A lot has been written, over the past few weeks, about "carry-trades" in both the financial press and the blogosphere; a good illustration of the views being expressed can be found in articles in the Economist, and on the RGEMonitor as can be found here, here, and here. The underlying theme that binds such articles is loud and clear: "…there is too much borrowing using the Japanese Yen (JPY) as a funding currency for investments in risky, high yielding assets. Consequently, if, or when, the JPY (for whatever reason) appreciates in value – and, or, if the BoJ hikes its policy rates - then a sharp reversal of short JPY positions in forward FX markets could wreck financial markets and endanger the global economy."

Detractors’ – of the carry trade - utilize a simple framework of analysis that is eye-catching in that its market and policy implications are alarming. My beef with all of this is that it is perhaps too simplistic, and its conclusions –ultimately- are not only on the outer edges of plausibility, but also predicated (more) on event-risk rather than fundamental economic risk.

Though difficult to accurately verify, I do not doubt consensus estimates that JPY and CHF (Swiss Franc) based funding is indeed driving the bulk of the carry trade in most EMs these days; in fact the Economist estimates that up to a Trillion dollars of carry trades maybe built on JPY funding alone. All of this, in turn, appears to be driving down the cost of risk-assets, etc. But I have a problem with the widespread peddling of 2 fear-mongering concepts: first, that a sharp appreciation of such funding currencies could lead to a total reversal of or a breakdown in global carry trades; and, second, that policy tightening at the central banks of funding currency countries could have the same financially wrecking and economically devastating effect.


I assess below the (un)reasonability of these two fear-mongering arguments by exploring their plausibility:

First, let’s say the JPY appreciates sharply on account of surprisingly/persistently good economic news. For such a phenomenon to put an end to carry trades in EMs, it would have to be hard and fast and permanent.

Hard = JPY appreciation in excess of 12%-15%; wherein such appreciation offsets an assumed average (or median) EM local currency nominal yield of around 7% to 9% and an – expected - average annualized real FX appreciation rate of around 4% to 5%.

Fast = very quickly, as in the referenced [hard] JPY appreciation would have to take place in a matter of days, and certainly within less than a month.

Permanent = a lasting condition wherein the [hard and fast] JPY appreciation is not transitory and stays at an appreciated level for a considerable length of time, say, 6 months or possibly longer.

Maybe I am missing something, but amidst Japan’s structural growth and inflation problems and with the added budget constraint of weak public finances and a deteriorating demographic profile, I can’t conceivably imagine how or why the JPY would meet all the hard-fast-permanent appreciation conditions, referenced above, such that JPY funded global carry trades become suddenly worthless or even incur losses.

To be more specific: I do not disagree that, on a trade or inflation adjusted basis, the JPY is undervalued. Consequently, I do not doubt that the JPY does indeed have appreciation potential – perhaps even to the extent of +15%. However, it remains questionable, whether, from a fundamental standpoint, such a large and rapid extent of JPY appreciation will be permanent or even be, temporarily, tolerated by Japanese authorities on account of its deflationary impact and the loss of external competitiveness that it entails. Japanese growth remains far more dependent on net-exports than its U.S. counterpart, and its fragile inflation fundamentals need far more nurturing on account of its critical importance in setting domestic expectations about wages, prices and interest rates and ultimately affecting the temporal stability of consumption trends. As a result, while I remain sympathetic to the "theoretical" possibility of at least some JPY correction, I doubt if its magnitude, rapidity and permanence can come anywhere close to putting at risk the entire construct of global carry trades.

All told, I do not doubt that occasional strengthening of the JPY may hurt carry positions; it probably already has in mid-Feb, after the release of 4Q06 GDP data showed a strong economic upturn and led to a sizeable JPY strengthening (see Chart: 1). As such, the occasional strengthening –or such expectations therein- do seem to trigger spikes in unsecured overnight call rates ("Mutanpo") in interbank markets as investor demand for hedges on unsecured carry trades rise. As is notable, from chart 1, below: the few moments of uncertainty about BoJ rate hikes (in mid-Jan’07) or JPY appreciation (in early-mid Feb ’07) have hardly caused a "blow-out" in interbank rates, thereby signifying considerable confidence in both Yen stability and/or gradual BoJ rate hikes. 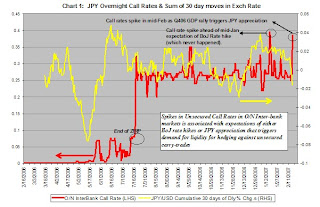 The second fear-mongering argument is that the BoJ is going to raise interest rates which in turn could hurt the cost of carry and cause turmoil in global asset markets. This too is a fallacious line of reasoning; as Claus Vistesen has already strenuously argued, here, Japanese inflation remains as elusive as Yeti "the abominable snowman" (notwithstanding, the recent spurt in growth, as evidenced by Q406 numbers). In light of this, the BoJ remains not only unsure about its policy stance but also highly vulnerable to political criticism for reacting to soon or too fast or in response to the wrong data release (i.e. hiking rates –in a politically unpopular fashion- in response to strong economic growth, rather than strong inflation).

But even if I am wrong, and the BoJ does in fact raise rates (as was much expected in mid-January ’07, including by such experts as Takehiro Sato of Morgan Stanley) – then, in my opinion, not only is a 25 bps rate hike simply too small to offset the juicy yields still on offer in such places as Brazil, Turkey, India, Lithuania, and elsewhere… but JPY funded hedges to protect against carry erosion is eminently possible in Japanese interbank markets at fairly attractive prices (the last 2 major spikes in "Mutanpo" –in mid-Jan ‘07 and mid-Feb ’07- averaged less than 15 bps).

Before I end, I would like to point out that our comfort with carry trades remains subject to two other caveats:

First, is the idea – originally advanced by Nouriel Roubini - that if good economic news out of Japan is accompanied by bad news in the U.S. then the JPY could stand to gain much more. Consequently, carry trades could come under far more pressure. Once again, this is all theoretically correct. But why should the U.S. continue to encounter more and more bad news to begin with? If anything, good economic trends in Japan should – over time - offset internal demand weaknesses in the U.S. (say, if, for instance, the housing downturn in the U.S. were to become prolonged then strong Japanese demand should increase the net-exports contribution to U.S. GDP growth). It’s almost as if Roubini were subjecting the U.S. economy to autarkic assumptions and analyses while using the ensuing outcomes in assessing globally inter-connected risk phenomenon!

Second is the criticism about leverage and margin calls. I agree, here, that carry trades that are put on with entirely borrowed (and un-hedged) funds are dangerous, are subject to mark-to-market losses and subsequent margin calls. The resulting risks to the, largely unregulated, hedge-fund industry are obviously sizeable. While agreeing with the systemic risks, I would still argue that this issue is not a direct outcrop of the "carry-trade" per se, nor is it a result of global imbalances and/or the lack of desired policy coordination. Rather, I would put the blame for such systemic risks on regulatory shortcomings in global capital markets that have been unable to keep up with financial innovation and the opportunities that have cropped up with the recent financial maturation of several emerging markets at once.

So, to conclude, carry trades are here to stay for quite a while. All the talk of structuring such exotic trades as short CNY/long INR are a part of a global trend that seeks to capitalize on new and emerging opportunities which may seem surprising or go against the grain of traditional notions of the creditworthiness of a Brazil or an India or a Turkey. But like it or not, somebody somewhere thinks BRL, INR, TRL assets offer good returns and they are going to find the cheapest way to get their hands on such assets. Currently, the JPY definitely remains a very good bargain!
Posted by Admin at 6:41 AM