An Overheated Debate About India Overheating 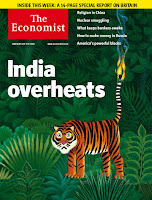 I didn’t know whether to laugh or cry when I saw the cover of the new issue of the Economist. The tiger’s face is hilariously confused, his tail is on fire; the Indian economy is overheated. Game, Set, Match.

Readers of the Indian Economy Blog will have seen Edward, myself, and others question the premise of these judgments, and we have had some lively discussions. Clearly, there is opinion on all sides here, and it is based on sound observation and analysis. On the one hand, inflation and credit have accelerated way too fast, and reforms have seemingly slowed. On the other hand, productivity has accelerated, there is finally a glimmer of hope that some half-decent infrastructure may be built, and the ambitions of the Indian private sector are rapidly expanding. Economic opinion has split into two general camps: “the raging bulls and the raging bears.”

In its lead article, the Economist challenges two big notions that have been raised on IEB: one is the idea of the demographic dividend, and the other is the idea that Indian productivity has seen a step-function increase in the early part of this decade. “Many Indian economic commentators say that further structural reforms, though desirable, are not essential to keep the economy growing at 8% or more because of the “demographic dividend”.” Even our own Edward Hugh, perhaps the biggest proponent of India’s demographic dividend that I have come across, probably would not sign on to this. As I have repeatedly stressed here, the Economist is making a political judgment: ‘reforms are essential; and the government (and the, ahem, optimistic economic commentators) don’t realize this.’

“Yes, the economic reforms of the early 1990s spurred competition, forced firms to become more productive and boosted India’s trend—or sustainable—rate of growth. But the problem is that this new speed limit is almost certainly lower than the government’s one. Historic data would suggest a figure not much above 7%—well below China’s 9-10%.”

The comparison with China seems apt - inflation is low, their growth and productivity is higher, and their leadership knows what needs to be done. Not so for India. It is compelling narrative, but it misses the point. In fact, the defining feature of India’s growth over the last 15 years, and the last 4 years in particular, has been the wholesale move away from the command-and-control economy. The Chinese economy, by contrast, still functions at the behest of the Communist Party leadership - if they want to stop migration to the cities, they can; if they want to stop real estate construction, they can; if they want to build a dam…

India, meanwhile, has mostly been powered by individual initiative. Embedded in the Economist’s forecast for trend growth is a 30%-40% deceleration in total factor productivity - from a rate of 5%pa over the last 4 years, to about 3%-3.5% in the next five. Unlike the analysts at Goldman Sachs, they believe that the recent acceleration has been cyclical and not a structural up-shift. The Government of India is on the other end, believing that the recent acceleration can be sustained. Part of me is sympathetic to the Economist’s hand-wringing - no one wants our bloated government to get complacent. But it is disingenuous to extrapolate that a hard landing is imminent - because of this lack of confidence. (The Economist’s in-house data bank, the Economist Intelligence Unit, has made estimates of TFPG which are far more optimistic. Click here to see them in Google Spreadsheets)

“India’s demographic structure is indeed starting to look more like that in East Asia when its growth took off. But this mechanistic view of growth assumes that demography is destiny and that economic policies do not matter.”

Demographics is not destiny - the economy has to be able to accomodate the increased workforce if the benefits of the DD are ever to be realized. But basic economics still hasn’t changed that much. Unlike in China, the domestic private sector is a very powerful force in India. They are hiring fast, and others are investing in private schools, colleges and training institutes. India’s civil society in the yin to the private sector’s yang - the NGOs, the social entrepreneurs, and the public-private types are probably more vibrant and active in India than anywhere else on the planet. In China, these people are mostly in prison. It is also worth repeating that, because we are a democracy, the voice of these masses actually has the potential to echo in the halls of government.

One example of this is the case of our beloved Railways Minister (now the subject of an upcoming Harvard Business School case study), who made Indian Railways the only profitable government rail system in the world - with an operating profit around $2 billion. And other examples abound. Hampered by the communists, reforms have been rather stealthy of late, but nevertheless substantial. The privatization of the airports was no small task, nor was the freeing up of civil aviation and the resultant boom. Tariffs are inching down, freeing up high-end exporting industries. A damn big highway system is being built, Delhi has a shiny new subway system, and Mumbai is set to get its own. Other big, ambitious infrastructure projects have been greenlighted - and, contrary to the Economist’s claims, private investors are starting to snap up these opportunities, now that the easy money (resulting from falling interest rates) has already been made - capex is the in thing.

With tacit approval from the government, the private sector has also brought us to the cusp of a revolution in the retail industry. Distribution, logistical, and back-end infrastructure is barely there in India - and thanks to massive investments on the part of the Wal-Mart’s and pretty much every big corporate house in India - this picture might change within the near future. (It is worth mentioning that, in most large countries, the retail industry is the largest employer).

Other, more ambitious structural reforms (like the loosening of labor laws) await - and once our leadership is endowed with the political capital to make them happen, they will. The budget presentation at the end of this month will be a defining moment, and time will tell how the “Dream Team” will seize the opportunity. Over the horizon, another such moment awaits. In 2009 (or perhaps earlier), Indian voters will render a verdict on high growth - decide whether or not they want it to continue, and empower those they think can best get them there. It sounds a bit idealistic, I know - but stranger things have happened. Amidst massive economic change, the politics of the day have to change as well. The MLAs and the MPs may drag their feet, but my guess is that the private sector, the NGOs, and masses who want to get out of poverty will gradually show them the way, as they did with Lalu.

I don’t normally consider myself an economic nationalist - but there is something in the Economist’s words which hearkens back to how Wall Street viewed East Asia before the crisis, or how the IMF prodded Argentina in the early part of this decade. Fortunately, unlike those two cases, the Economist (as far as I know) does not have the resources to carry out a run on the country’s equity market and currency. There is a part of me which can’t resist believing that this is another case of West misunderstanding East - but, until recently, the Economist has not always been prone to such error. It is not often that the magazine issues such a categorical denunciation of a country’s stated economic aspirations and prospects without so much as acknowledging the (fairly prominent and obvious) long-term trends.

Still, I must say, the cartoon tiger is hilarious.

The above post also appears on the India Economy Blog, and we recommend to all those readers of GEM who are interested in following debates about the future of the Indian economy that they go take a look.