Latvia's economy shrank by nearly a fifth (year on year) in the first quarter, according to the latest flash estimate from the national statistics office. Obviously this is a dreadful state of affairs, and illustrates just how difficult the country's chosen adjustment path is proving to be.

Gross domestic product fell 18% year-on-year, and Statistics Latvia reported that the decline was broad-based, with manufacturing down 22%, retail trade down 25% and hotel and restaurant services output 34% lower from a year earlier. "The economic situation is of course very serious," Latvian Prime Minister Valdis Dombrovskis reportedly told a press conference in Stockholm, and who could disagree.

The latest GDP numbers from Latvia suggest that the actual situation is in fact worse than the already pretty gloomy expectations. In many ways the “worst case” scenario for the medium term outlook for Latvia has now become a reality. Taking into account further tightening on the fiscal front the downturn could become even more pronounced in the coming quarters.

The weaknesses in the economy seem to be pretty broadly. The decline in both the manufacturing and the service sectors continued in Q1. The export sector has been contracting steadily, due both to slack global demand and uncompetitive domestic prices.

Industrial output was down by 23.4% in March, according to working day adjusted data from the statistics office. Manufacturing fell by 26.6%, electricity and gas supply by 14.1%, while mining and quarrying activity actually increased of 25%. The strongest reductions in industrial output were in textiles - down by 59.2%, in the manufacture of motor vehicles, trailers and semi-trailers – down by 52.9%, and in the manufacture of machinery and equipment - down by 47.2%. 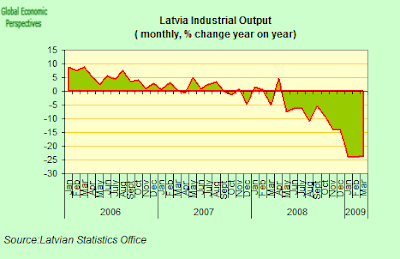 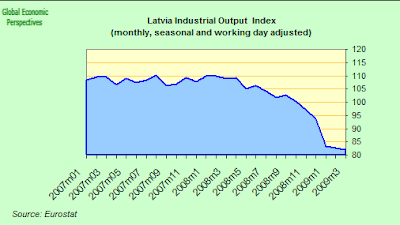 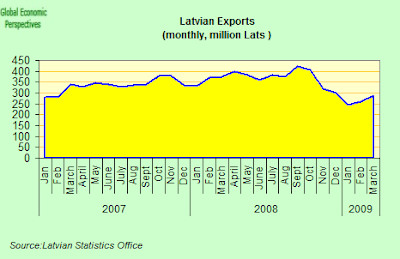 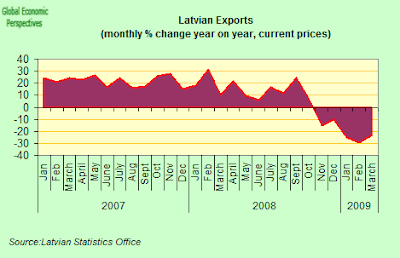 70.8% of Latvia’s March exports went European Union countries, and another 15.1% went to CIS countries. The principal export partners were Estonia (13.3% of total export), Lithuania (13.0%), Germany (10.2%), Russia (8.7%) and Sweden (7.2%). Since all five of these main trade partners are themselves in strong recessions at this point the outlook for improved exports (even were Latvia competitively priced) is not exactly promising at this point.

The drop in imports does, of course, mean that the trade deficit has been steadily improving (see chart below), which means that despite the drop in exports, net trade has actually been positive for GDP in the first quarter. 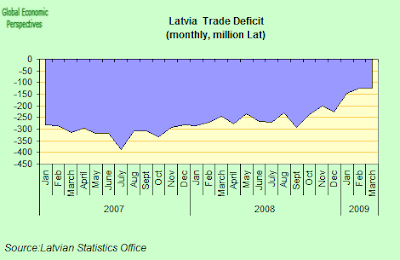 One of the key points in Latvia's "non-devaluation" strategy is to get the wage and price level down quickly. Since the only relief can come from exports as the global recovery starts to take shape it is important that as much of the internal deflation process should have been carried out by that point. However when we come to the reality it is important to note that progress has been slow, and far from satisfactory. The consumer price level was down in April by 0.4% with respect to March, but compared to April 2008, consumer prices had still increased by 6.2%. Obviously much of this inflation is already inbuilt, but in the absence of independent monetary policy it is obviously clear that the Latvian government should be doing more to speed this up, otherwise all this is going to take an eternity, the pain will be unendurable, and much of the structural damage well nigh permanent. The Latvian economy could look worse than the Florida coast after a hurricane has passed. 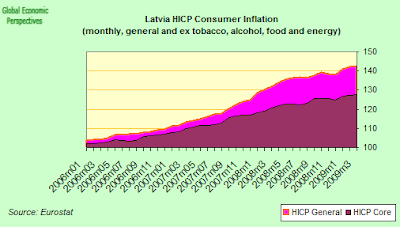 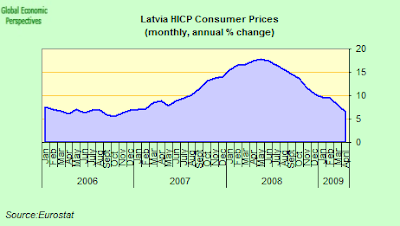 The only really bright spot is that the tradeable sector does seem to have responded rather more rapidly than the rest (as theory would predict) and export producer prices are now falling rapidly. 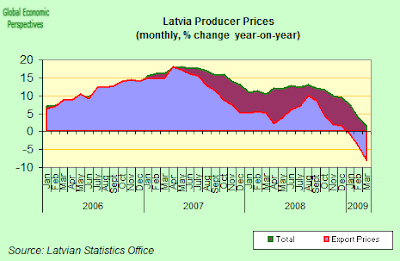 Company finances are strained, as internal demand is weak and financing conditions tough. In addition, the position of the Latvian consumers is difficult, as unemployment has shot up and wage growth has slowed. 2009 is likely to be a very difficult one for Latvia, and the government faces the twin challenge of both keeping the budget deficit within a limit accepted by the IMF in order to receive the rest of the emergency loan, and of breaking the back of the economic contraction which is currently spiralling away out of control.

Households are obviously also having a hard time, and incoming data on the rise of non performing loans in Latvia is becoming preoccupying. NPLs (loans that are more than 90 days overdue) as a proportion of the total rose to 7.8% in March (see chart below), and while this level is still not excessive, it is that rate of increase that causes concern. 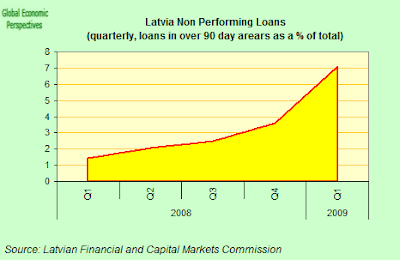 Retail trade turnover was down in March by an astonishing 27.3%. 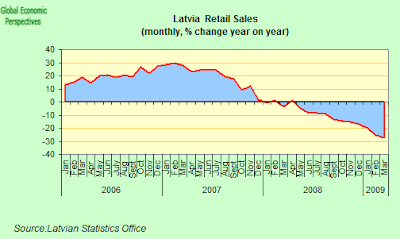 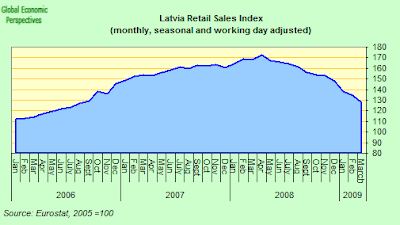 Obviously one of the factors driving the increase in non-performing loans is the rapid rise in unemployment. In fact, as elsewhere the rate of increase eased in April, but still the rate of unemployment rose to 11% and the numbers unemplyed to over 120,000, according to the latest data from the State Employment Agency. 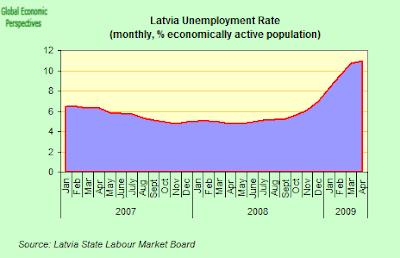 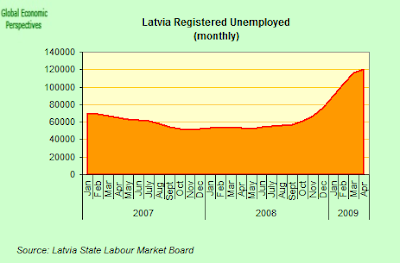 At the present time the government is working towards a deficit of 7% of GDP, above the 5% initially agreed to with the IMF. According to the Prime Minister discussions with the IMF about allowing a larger deficit are ongoing. Maintaining the deficit within the 5% of GDP limit is turning out to be increasingly difficult as the economy has contracted much more sharply than anyone anticipated.

According to Latvian economy Economy Minister Artis Kampars the economy has now reached the bottom and on the point of recovery. Kampars said this in an interview with LNT television. Asked about the gross domestic product decrease of 18% in the first quarter, Kampars said that it was logical and expected, but the GDP will start increasing later on this year.

He also said that regardless of the significant fall in the GDP, the government is not planning to revise the budget amendments, which are based on a 12% GDP drop.

Basically this whole view could not be farther from the truth, since the worst is yet to come, even if this may not be in terms of ever stronger rates of contraction. 18% is we have to hope "unrepeatable", as a year on year figure, and the contraction in the future may well be slower. But this is not what matters. The hardship of the Latvian people will undoubtedly increase, as will what is called the level of "distress" when it comes to paying loans. I see no recovery on the horizon, and even though the rate of contraction will almost certainly decline, positive growth is a long time away, and it would be a brave person who was willing to forcast any sort of growth in any quarter before we hit 2011.

We need to break the circle, or are we just, like Dicken's Mr Mikawber simply going to hang around and wait for something or other to turn up? And if we are, then I'd be firmly locking and bolting the back door, since all those able bright young and educated people will be sneaking off elsewhere as soon as recovery starts up across Europe, and they won't be coming back, and then we really will be in a pickle, won't we? Or are we hoping they will be like his wife Emma, who let her maxim be "I will never desert Mr. Micawber!"