You can't fault a good journalist for trying, you really can't. Yet, try as they might they simple were not able to get ECB President Jean Claude Trichet to concede that the bank has now decided to enter some (or any) form of quantitative easing, nor could they wring out of him an answer as to whether the 1% interest stance would now constitute an effective floor for the ECB policy rate. Before, however, we get ahead of ourselves let us begin with the beginning.

The almost trivial outcome of today's council meeting in Frankfurt was actually the decision to push the main nominal interest rates down 25 basis points to 1%. If anything, risks to this decision seemed to come from the upside in the sense that all the talk of impending green shoots and second derivatives would make the ECB pause. What was always going to be much more interesting at this meeting would be whether the ECB would announce a series of those famous unconventional monetary measures, and if so; what they would be. In their comment leading up to today's decision, Danske Bank economist Frank Øland pointed out that he expected some form or measure of buying paper or assets. For my own part, I mused a bit on what the heck the ECB was saying in the first place conceding that talks about unconventional measures were indeed popping up in the statements of council members.

Consequently, the ECB brought three things to the table today in the form of longer term refinancing operations, the decision to let the European Investment Bank become eligible counterparty to the Eurosystem's monetary policy operations and most importantly a decision to, in principle, start buying covered bonds of which 60 billion euros was mentioned as the headline figure.

Now, all this about principles of course is open to a wide range of interpretations and Trichet certainly had to dodge a lot bullets at the press conference regarding whether this constituted quantitative easing or not. In the dying minutes of the conference Trichet himself used the words credit easing, and I will let be up to my readers to decide what this means. The president also snubbed FT reporter Ralph Atkins in his question of whether he was allowed to write that the ECB is printing money or, as it were, sterilizing the purchases. The more interesting bit here of course is why exactly the ECB would be buying covered bonds, of all assets. In order to understand this, you basically need to go to Spain and recount the story about cedulas hipotecarias, what they mean for the Spanish financial system and the stress her banks are currently suffering. Start with this one by Edward and then this, this, and this. And if that is not enough, you can go chew on the role of the German Phandbrief. Basically, I think there is a sound economic rational behind the ECB's decision to begins its asset purchase program on this front and whether we call it quantitative easing or not is of little matter I think. It will be most interesting next meeting to see what exactly the ECB is planning in the detail.

With respect to the economic outlook and the level of interest rates and its future change, we were served the regular bout of newspeak from the council which essentially is a reflection of the fact that the journalists were trying to get Trichet to pre-commit to an interest rate floor. Their endeavors were unsuccessful and in stead we got a rather conflicting message in the sense that while Trichet pointed out how 1% constituted no such thing as a floor, he also highlighted the idea that the current stance was appropriate and had also taken into account future weaker signals on the economy. In this light, we can only guess as to how forward looking the council believes the 1% nominal interest rate really is. Personally, I think that the extent to which the green shoots/second derivative punt continues the ECB will stand pat at its next meeting.

Turning to the specifics of the economic situation the ECB rightfully recognised the severity of the situation in the introductory statement and pointed out that risks are still skewed to the downside even amidst green shoots. It is rather obvious that the downturn is in full force and the recession is now also biting, as it were, on the real economy. This is most obvious from the quick deterioration on the labour market as well as the general slowdown in the real sector. 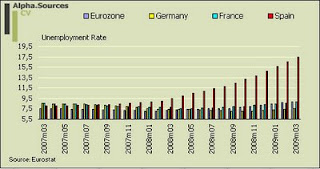 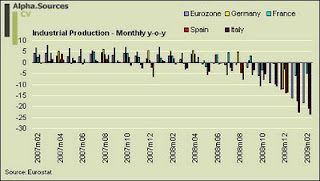 In terms of inflation, the message was a bit unclear in so far as I think the fundamental discourse is counter intuitive. There is a natural reason as to why this is though in the sense that the ECB would like to be worried about deflation at the same time as it wants to be adamant about anchoring inflation expectations and ever so pointing out that whatever unconventional measures taking are temporary. 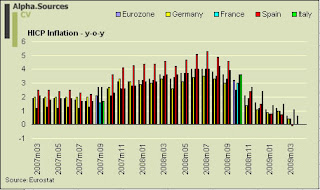 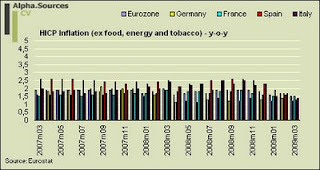 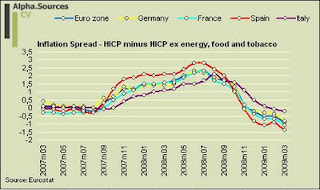 There can be no doubt that the Eurozone is teetering on the brink of deflation but since this is also primarily a base effect from a very sharp reduction in commodity prices, the ECB is happy to stick with the standard argument that although inflation should turn negative in mid year it will rebound in subsequent quarters. The fact that headline inflation is adding negatively to the overall HICP can be seen from the negative sign of the graph plotting the spread between core and the main HICP index. it is interesting to observe how the ECB is now confident that energy prices won't lead to an entrenchment towards deflation when we all remember how the bank was terrified of second round effects from higher energy prices a year ago. Perhaps this asymmetry in the famed argument of nominal rigidities and how this may prevent the Eurozone from deflation is what disturbs me the most. Add to this of course that Trichet still maintains that the council is represent 329 million European citizens which apparently means that he does not see, or wants to mention, the fact that places such as Ireland and Spain are already well and truly bogged down in deflation. On the other hand of course, and given recent signs that commodity prices are beginning to sneak back up, we should expect the ghost of second round effects to emerge once more.

Finally, it is interesting to look briefly at financing and credit conditions where it was noted by Trichet how lending to households and non-financial corporations are still falling. Also, if we look at the annual rate of growth in the much allured M3 measure it has also fallen back steadily. Now, just as I don't care much about the M3 when it running at 10+% I am not sure I care much now since the creation of money/deleveraging may have a life of its own beyond the M3. Of course, as Danske Bank points out basing their analysis on the lending survey there may also be a second derivative here too, but this would only echo the general sentiment expressed by Trichet in the sense that whatever stabilization we are observing it is situated at very low if not negative levels. 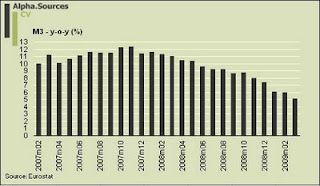 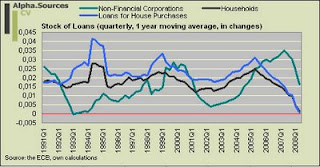 Turning to the evolution of credit the picture is similar. The figure which is actually underestimating the trend because of the one year moving average clearly shows though how the flow as derived by the total stock is on a clear downtrend. In both Q4-08 and Q1-09, the evolution of the stock of household loans was negative. Moreover, Danske Bank's fine analysis of the lending survey suggests that a lot credit tightening is still clogged up in the pipeline even if the trough may have been reached. The interesing thing here will the extent to which the second quarter will see some improvement over a Q4-08 and Q1-09 which were clearly utterly abysmal. Note also that the chart to the right is an average which is of course ripe with generalizations. Basically, some economies such as Spain and Ireland are experiencing a much faster rate of contraction in credit than can be derived from this chart. Also and given the fact that this is after all a unique crisis, we really don't know much the overall stock needs to be capped before we are "done".

In summary, today was a quite significant meeting if there ever was one and the thing to watch is how the ECB will conduct itself in the covered bond market. As noted above, I am thinking cedulas and Spanish cajas as the main key words.