Are The IMF and The ECB Lining Up Against The EU Commission Over Latvia?

There was a very interesting and revealing press conference given by IMF First Deputy Managing Director John Lipsky and European Central Bank governing council member Christian Noyer in Paris on Thursday. Christian Noyer said that, in his opinion, Baltic countries like Latvia would not be helped by joining the single currency (the euro) prematurely.

"It's in the interest of candidate countries not to enter too early because it risks making the economic situation unbearable," Noyer said.

Lipsky, for his part stressed the region could not depend on any particular foreign exchange regime to shield it from the effects of the financial market crisis:

"If there is a solution it begins with macro policies," Lipsky said. "No single exchange rates solution, or exchange regime represents a solution to these kinds of problems. What is important is that the currency regime is credible and coherent".

Do I detect a shift in emphasis here? Certainly Latvia's currency regime is not credible (most external observers now consider devaluation inevitable), nor is it - in my opinion - coherent. And there has only been a deafening silence coming out from the IMF in recent days on the topic.

The EU finance ministers have decided to support maintenance of the peg, but that is hardly surprising, however, Swedish Prime Minister Fredrik Reinfeldt told Reuters, again rather revealingly, that "We think that a clear signal of support from the EU would help them to achieve support from the IMF." That is, the IMF is wavering, and the EU is putting pressure. This, approach, however, suffers from the flaw that it is hardly either coherent or convincing.

Now the Latvian parliament approved budget cuts of 500 mn Lati for the 2009 budget on June 16, a vote which lead the EU to decide to release the next 1.2 billion euro tranche of the emergency loan to Latvia. So why is the IMF still assessing the situation? Some draw consolance in the idea that the IMF’s share of the program is smaller - only 1.7 billion euro in comparison to the 3.1 billion which is coming from the European Commission. But this is to neglect the strategic role the IMF is playing in the whole process. If the IMF isn't leading, then what is it doing. Evidently, the fissures which may be developing between the Commission on the IMF approaches only serve to draw more attention to the complexity of the whole current EU economic and political architecture.

Latvia is a sovereign country, also member of the European Union. Looked at from one point of view, what was the IMF doing there in the first place. But once they have taken leading responsibility, it is not wise for the Commission to try to claw this back from them. After all, the whole process is supposedly intended to raise investor confidence, something which is hard to do if there is not unity of purpose.

Meanwhile liquidity conditions continue to remain tight, and Rigibor interest rates shot up again at the end of last week, following the termination of the summer solstice holiday. 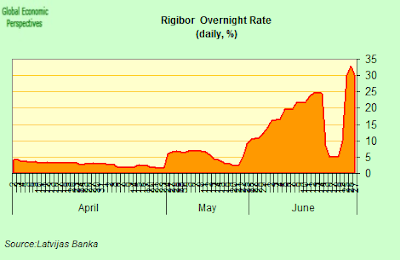 The last official news we have said simply that the IMF would decide on the Latvian loan after June 26. Well we are now after June 26, and we are still none the wiser.

Meanwhile Latvian's continue to save, and outstanding private debt fell in May to 14,140.2 million Lats from 14,252,4 million Lats in April. They year on year change is now down to only 1.6%, and will more than likely turn negative in June, which means that, with the government also trying to save hard, continuing contraction is completely guaranteed without exports. 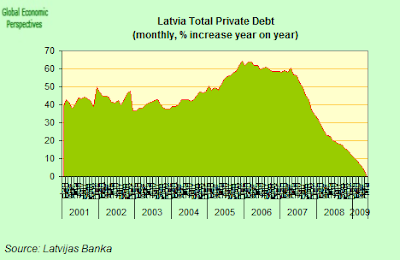 And today we have two additional pieces of relevant news. Firstly, and most interestingly, former IMF chief economist Kenneth Rogoff - now a Harvard University professor - has said the IMF made a mistake, and should never have allowed Latvia to keep the peg. (That is, he agrees with what Krugman and I have been arguing all along). The IMF, however, is still maintaining an apparent vow of silence on the whole situation, or so it seems, and have yet to pronounce. Hello, EU Commission, how can you lose your heads, when all around you are keeping theirs?

Latvia should devalue the lats to avoid a worsening of its economic crisis, said Kenneth Rogoff, a Harvard University professor and former chief economist at the International Monetary Fund, in an interview with Direkt. The IMF made the wrong decision when it allowed Latvia to keep its currency peg, Rogoff said in Visby, Sweden today, according to the Swedish news agency. While a quick devaluation would be best for Latvia, Rogoff doesn’t believe it will happen for a long time because the IMF and Europe will provide the Baltic nation with loans, Direkt reported. In a normal situation, Latvia would already have devalued the lats and defaulted on its debt, Rogoff said, according to the news agency. World leaders have decided no countries should be allowed to fail and Latvia is benefiting from that, he said.

Secondly Central bank governor Ilmars Rimsevics has given an interview to Reuters TV. He will go down with his ship, like every good Captain should, but there will be no lifeboats for the rest of you.

Latvia will stick to its currency peg and not devalue, even if the country fails to win further loans from the European Union and International Monetary Fund, its central bank governor said on Monday. "People who are expressing that (a devaluation is possible) lack some education and knowledge and I am sorry. There is absolutely nothing to do with devaluation in Latvia," he told Reuters at the Bank for International Settlements (BIS) meeting. "If the cuts (in the budget) won't be made, there would not be financing available, but that in no way would influence or affect the currency peg," Rimsevics added.

The European Central Bank also today urged urged Latvia to rethink plans to siphon off half of its central bank's profits to help rebuild the country's battered finances. Latvia's government plans to up the amount of central bank profits it takes, to 50 percent from the current 15 percent.

In a legal opinion published on its Web site on Monday, the ECB warned the move risked hurting Latvian central bank independence and wiping out funds designed to be a financial safety net for country's troubled banks. "The use of central bank financial resources may be counterproductive from the credibility point of view if confidence in the financial stability and independence of the National Central Bank is undermined," the ECB said.

"It is important to shield the rules related to the distribution of profits from third-party interests and to ensure a legal framework that provides a stable and long-term basis for the central bank's functioning."

One of the most crucial questions going forward is will the process of relative price adjustment, while still keeping the peg, be able to balance the economy, or will it turn out to be intolerable, thus leading nevertheless to devaluation in the end. Although wage growth and inflation are slowing, one could ask whether the adjustment is fast enough to enable Latvia to keep the currency pegged. Uncertainty about the answer is likely to keep the devaluation fears as well as the uncertainty in the FX and money markets alive in the future.
Annika Lindblad: Nordea

Well quite, this is one of the things I have been arguing all along, and now those who in theory support the maintenance of the peg begin to "worry" that the rate of price and wage decline may not be fast enough to maintain the peg. Wouldn't it have been better to have thought a little more about this, before embarking on what is evidently such a risky endeavour.

At the end of the day what we could really say here is, that in a bid to defend credibility, all credibility has now been lost, and things will only get worse from here on in. Tragedy has already repeated its self as tragedy, and now its about to become one of the sickest of all sick comedies. I think it's time to put a stop to the agony.
Posted by Edward Hugh at 9:27 AM