I have had a nice weekend not least because I have finally received my new laptop and as the first, of many, blog entries to be typed I would like to point your attention to some recent comments made by the German finance minister Peer Steinbrueck in the context of the increasing risk of further downgrades of European sovereigns following the decision by Standard and Poor to downgrade Ireland's debt rating for the second time in 2009. As I think a bit about what it actually is Mr. Steinbrueck is saying I cannot help but feel that our good Finance minister is perhaps feeling a bit too smug here. Now, as Mr. Steinbrueck points out and as has been the source of wide debate, this is an issue which reflects itself in the widening of sovereign yield spreads among economies in the Eurozone (picture courtesy of Ibex Salad). 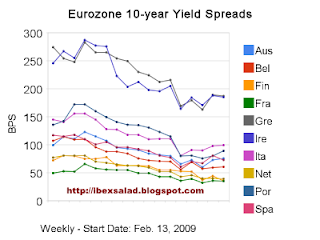 Now I am not sure that Mr. Steinbrueck really intended to come off as smug. In truth he may just be concerned, and rightfully so, about Germany fellow Eurozone members and perhaps even the ability of the Eurozone to weather the incoming crisis as one entity. However, I do think the following is rather complacent when you think that it comes from the finance minister of an economy with more than a few problems, not least on the fiscal front.

“What’s going to happen to our friends in the European Union that are not getting the same conditions” as Germany when borrowing money from capital markets, Steinbrueck said in Lecce, Italy, where he’s meeting counterparts from the Group of Eight nations. “I’m hinting at this now so that nobody asks in half a year or so whether I was blind and whether that wasn’t an issue in international discussions.”

Ok, fair enough Mr. Steinbrueck. I for one will not accuse you of being blind further down the road, but I do think a bit of humble pie is in order here. Consequently, there are two risks here. On the one hand there is the narrative Steinbrueck is latching on to in the form of the periphery acting in such a reckless way that they risk pushing themselves so far into the mire that it risks the future of the Eurozone or, if we move the predictions down a nudge, their own economic prosperity. The other risk however is a much more sinister one. Consider then the idea that the threat towards economic stability in the Eurozone comes not from the periphery but from the very core of the edifice in the form of a German economy whose growth model is extremely vulnerable to the current conditions and which has no meaningful defense. The idea here is simple enough. As bad as the crisis in the periphery is, bad indeed it is, what happens when markets wake up to the fact that the weakness and dysfunctional economic edifice stretches into the very heart of the Eurozone? Specifically, what happens to those much hailed better conditions in the context of Germany Steinbrueck points towards?

Clearly, there is ground for more than a little food for thought here and especially so in the context of Germany who has now definitive lost the source of its hitherto export driven growth in the form of a faltering CEE as well as a severe crisis in its main Eurozone trading partners.

But, by no means does Mr. Steinbrueck stop here.

Steinbrueck signaled disappointment that the G-8 failed to choose stronger language today on “exit strategies” to the financial and economic crisis, such as scaling back government borrowing and withdrawing monetary policy stimulus.

“More was not to be expected” on exit strategies, Steinbrueck told reporters after the meeting when asked whether he was happy with the outcome. “At the moment we’re still occupying ourselves with crisis management, but the question of fighting inflationary developments in a timely fashion plays an important role.”

Now, if I feel that Mr. Steinbrueck was coming off as a bit too complacent on the first account I seriously think he is moving ahead of himself on this one. I don't know where this comes from, I really don't. Perhaps it is all the talk about rising yields on the long end of the yield curve in the US and the subsequent prediction that the Fed will soon head north to reflect better than expected conditions (and thus inflation). Consequently, I can't for the life of me understand why a German finance minister would be talking about exit strategies at this point in time. Surely, I respect being ahead of the curve as much as the next guy, but not to the extent that you start making assumptions about a recovery which is clearly not in the offering. Put differently, yes James, I do see what you see but not everybody does it seems. Sorry, but I cannot stress hard enough that talks about exit strategies and inflation fighting seem to me to be rather counter productive at this point in time; especially in the context of the Eurozone and Germany.

Too Smug for His Own Good?

Well, perhaps I am being a bit unfair here. I mean, here I am trying to find something to blog about a late Sunday afternoon and my gaze falls upon Mr. Steibrueck's latest escapades. The biggest issue here I think is really that Germany may not be as "safe" as everyone beliefs. The idea of Germany as the Eurozone anchor is about to be tested now and I have my doubts that the narrative will hold up for scrutiny. Of course, a couple of quotes ripped from Bloomberg are not exactly a solid foundation but, in this context, I would still venture the claim that Mr. Steinbrueck is being a bit too smug here.