Central Europe's Manufacturing And Consumers In A State Of Shock 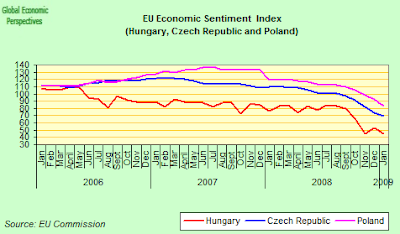 Central Europe's economies continued to contract in January - lead by their manufacturing industries - under the combined weight of a credit crunch and a slump in demand for their exports. My feeling as all three economies - Poland, the Czech Republic and Hungary - are now in recession. Hungary's is clearly the worst case, and events are moving rapidly and negatively there, but the slowdown in the Czech Economy is also very pronounced, and Poland seems finally to be falling into line, following some internal financial chaos back in October. Based on back of the envelope type calculations derived from the PMIs I would say their economies were contracting at the following pace in January.


These are only provisional assessments based on the PMIs and Consumer Confidence Indexes. They will be subject to calibration as we move forward and receive the real data, but all this should give us some general idea of what is happening, something which is badly needed in view of the suddenness of the change.

Hungary's manufacturing purchasing manager index (PMI) fell once again to a all-time low of 38.6 in January, down from 40.8 in December, according to the Hungarian Association of Logistics, Purchasing and Inventory Management (HALPIM) today. Any PMI index figure above 50 indicates expansion while a figure below 50 shows contraction in economic activity. The index hasd been above the critical 50 mark for more than three years before it dropped below (to 42.6) in October last year. 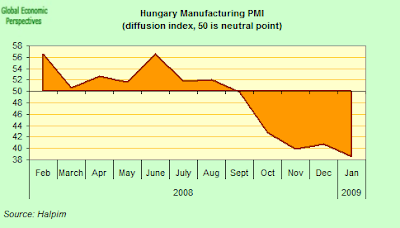 “In view of the current situation we can confidently say that the five month negative record of 1998 will be broken. We are facing the gravest crisis of the manufacturing industry in almost 15 years," the HALPIM said.

Economic sentiment also plunged in January with the GKI index falling to a record. The overall index fell to minus 39.8, the lowest since measuring began in 1996, from minus 36.7 in December. The sub components for business and consumer confidence also fell to new lows.

The outlook for industrial production and orders led a decline in the business confidence index to minus 30.5 from minus 28.2 in December. The outlook for export orders improved “minimally,”. Fifty-eight percent of exports are sold in the euro region, which is in its worst recession since the single currency began trading a decade ago. Concern about future job losses dragged the consumer confidence index to a record of minus 66.1 from minus 60.8 in December. 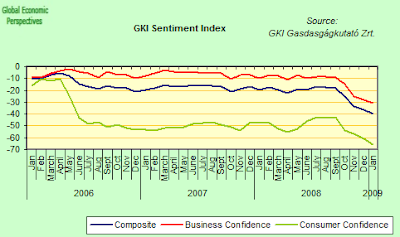 Morale in Poland's industrial sector rose for the first time in almost a year in January, but output growth remained mired firmly in negative territory, according to a purchasing managers' index survey published Monday. The survey of 300 industrial companies prepared by Markit for ABN AMRO showed Polish manufacturing PMI increased to 40.3 in January, from 38.3 in December. This is an improvement, but the contraction is still a strong one. 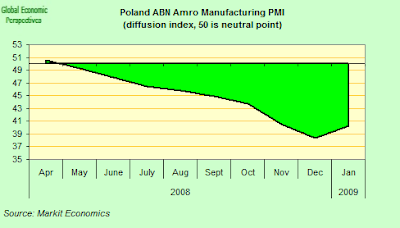 "Though slightly improved from the exceptionally weak December data, the latest survey findings underline the headwinds confronting Polish manufacturers in January. Output, new orders and employment all contracted sharply and, overall, the first batch of 2009 PMI data point to further aggressive rate cuts by the central bank in the first quarter following greater than expected reductions in the main policy rate in both November and December. Inflation concerns have eased despite the falling zloty, as the PMI showedfurther falls in price pressures in manufacturing." - Trevor Balchin, Economist at Markit Economics

Poles have become much more pessimistic about the outlook for their economy in recent months and the Ipsos Consumer Confidence Index fell by 11 points to 84.17. The assessment of the current economic climate suffered the most serious deterioration. 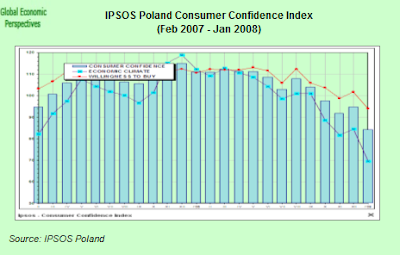 The consumer rating of the current economic climate plummeted by 15 points to hit 69.59. This is one of the lowest levels since Poland joined the European Union. Consumers are worried about the future of the Polish economy, and their worries are linked particularly to the situation on the job market. Currently some 52% of Poles expect unemployment figures to rise over the coming 12 months, while only 6% expect them to fall. This is a radical change, particularly when compared with January 2008, when only 13% expected a rise in unemployment and 39% expected a decline.

The deterioration in consumer sentiment was also to be seen in the ratings for willingness to buy, which in January fell by 8 points to 93.88 (the lowest level for 3 years). In particular expectations regarding the material situation of one's own household deteriorated. Ratings of the current situation in regard to buying durables also weakened somewhat. Nevertheless, consumer appetite is far from dead, and there are more people still considering this a good time for buying than those who disagree.


Czech industry continued its steep decline in January with the Czech Purchasing Managers' Index falling to dropping below the 50 mark (to 31.5) for the seventh consecutive month. As compared with December (32.7), the PMI was hit by series-record declines in new orders and employment, while deflationary pressure was also evident as both input and output prices continued to fall sharply, according to the report from Markit Economics and ABN Amro. The figure for output rose for the first time since September, to 29.5, indicating a slightly weaker rate of contraction than in December but still the second lowest in the survey's history. 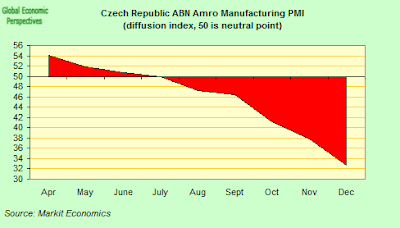 The survey taken among consumers in January indicates that, compared to December, consumers expect for the next twelve months worsening of the overall economic situation and a slight decrease in their own financial standing. In January, the share of respondents expecting a rise in unemployment increased again. The percentage of respondents planning to save money decreased. The consumer confidence indicator decreased by 4.8 points, m-o-m; it is by 15 points down, y-o-y. 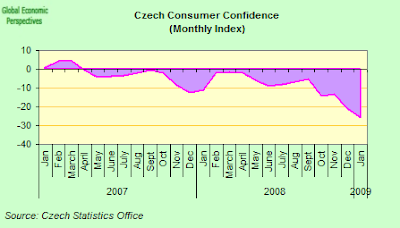