Latvia Downgraded To "Junk" By S&P

And the Swedish Krona clearly didn't like the news. 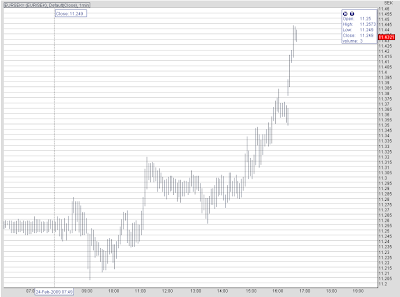 Standard & Poor's Ratings Services today said it had lowered its sovereign credit ratings on the Republic of Latvia to 'BB+/B' from 'BBB-/A-3' and removed the ratings from CreditWatch negative, where they were placed on Nov. 10, 2008. The outlook is negative.......

We believe the necessary process of private sector deleveraging is likely to continue over several years, during which time real incomes will decline, testing Latvia's commitment to both its exchange rate regime and its obligations under the EUR7.5 billion assistance program from the IMF, EU, and other official lenders. The adjustment is made more difficult as external demand for Latvia's key exports continues to decline."

The negative outlook reflects the likelihood of a further downgrade later this year or in 2010 if we believe the government is wavering from its economic agenda in a manner that intensifies currency pressures and risks delays in disbursements from official creditors. If the Latvian financial sector retains access to international markets at reasonable cost, economic prospects brighten on the basis of improved competitiveness, fiscal targets are met, and the near-term prospect for Eurozone entry improves, the ratings could stabilize at the current level.

The IMF are about to withdraw to base camp to observe developments from afar, although it is possible that they have laid out their "conditions" for the incoming government, but since they have no effective "interlocutor" it is not clear whether these conditions are going to be completely acceptable or not at this point. Christoph Rosenberg, IMF mission chief to Latvia, issued the following statement today in Riga:

"The program supported by the IMF, the EU, and other bilateral and multinational donors is meant to sustain policies that will put Latvia back on a sustainable path, not particular political parties or coalitions. As long as appropriate policies are in place, such support will continue.

As IMF Managing Director Dominique Strauss-Kahn has said, the IMF will continue its technical work with the Latvian authorities. The IMF mission currently in Riga for the first review of the program has, jointly with a technical team from the European Commission, made a lot of progress in identifying issues that need to be addressed.

The IMF mission will return to Washington at the end of this week and continue its work with the authorities from there. It will be ready to return to Riga and continue the discussions after a new government has taken office."

While EU Economy and Finance Commissioner Joaquin Almunia seems to be hinting that the EU may be "readying up" intervention. Well, if that isn't what he's doing then I am at a total loss to understand what he is up to.


The European Union could have to bail out a member state in financial trouble but such a move is unlikely, especially among countries in the euro zone, EU economic chief Joaquin Almunia said on Monday.

States such as Hungary and Latvia have received assistance from the EU, and other countries within the 27-member bloc might need a financial support programme, said Almunia, who is European economic and monetary affairs commissioner.

"You can't rule out that a country outside the euro currency might come to need this assistance," he said during an economic conference in Madrid. "We don't think we'll get to this position."

Almunia said euro zone countries were better off and less likely to need EU help. "With the euro zone the position is not the same, either in terms of public debt, foreign debt or the ability to react to this recession," Almunia said.

And the cost of Baltic country CDS not surprisingly shot straight up:

The cost of insuring Latvian sovereign debt for five years rose on Tuesday by more than 30 basis points after Standard & Poor's cut the country's sovereign rating to junk.

Five-year credit default swaps (CDS) for Latvia were quoted at a mid-price of 977.4 basis points, according to CMA DataVision, up from their Monday close of 943.7 bps. Five-year CDS for Lithuania hit a record high of 861.7 bps after the S&P move, compared with Monday's 831 bps. For Estonia, five-year CDS rose to 733 from 730.7 bps.

Below is a chart for Latvia's 10-year Eurobond (quoted yield to maturity) maturing on 5 March 2018, it is now trading some 700 bps in the mid (755 in the bid) over the closest (by maturity) German bund. Apart from noting today's market reaction it is possible to see how the spread, after settling down following the IMF-lead deal, has now opened right up again to the level of the previous October highs. 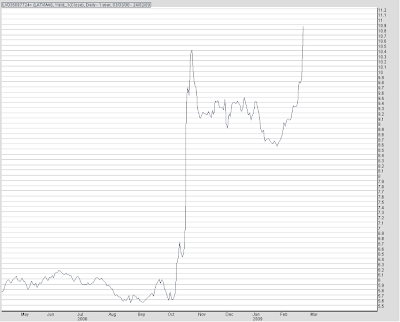 Moody's Investors Service also said today that it can no longer rule out a Lithuanian currency devaluation, although it was at pains to point out that this was not its central scenario. In the course of its annual ratings review Moody's said the following:

"Even though the net benefits of abandoning the currency board would probably be negative, a devaluation can no longer be ruled out in the current environment, but this is not Moody's central scenario,"

Last week Brown Brothers Harriman & Co. warned that Latvia’s weakening economy might force the government to ease its policy of managing the lats, spurring all three Baltic currencies to break their pegs by mid-year producing a fall of anything up to 50 percent to the euro.

“Latvia stands out as the weakest of the three because its external debt is very high and it’s got a big current-account deficit,” said Win Thin, New York-based senior currency strategist at the oldest privately-owned U.S. bank. “The contagion between the three is so strong that if Latvia broke the others wouldn’t be able to resist.”

Standard and Poor's also issued a more general warning today about the parlous state of many of the Eastern economies. In a report titled "Market Dislocation Exposes Vulnerability Of Eastern European Economies," published yesterday the agency stated that the resilience of Eastern European economies seems to be crumbling under the weight of high foreign currency debt and the potential reprioritization of lending among foreign banks.

"The financial crisis that started to hit developed economies after August 2007 did not immediately affect East European economies," said Jean-Michel Six, Standard & Poor's chief economist for Europe. "In fact, through the first half of 2008 their economic prospects still appeared resilient. But in the second half of 2008, the effects of the crisis started to filter through the region and are now gathering momentum."

In particular S&P's singled out the Baltics, Hungary, Romania and Bulgaria as especially vulnerable.

The Baltic states (Estonia, Latvia, and Lithuania), Bulgaria, Hungary, and Romania. For this group the level of economic vulnerability is high. The Baltic states face significant external financing requirements that make them highly vulnerable to a cut-off in capital flows. Each maintains a currency board (except for Latvia), and the pegs to which their currencies are linked remain under heavy pressure, as they have since the middle of last year. Bulgaria's main vulnerability, meanwhile, remains its massive current account deficit. As foreign financing becomes much tighter, the Bulgarian economy is likely to experience a painful period of adjustment in 2009 and 2010, with GDP growing about 1% this year and close to 2% in 2010, and a negative growth scenario cannot be excluded. A similar rationale applies to Hungary, where we expect GDP to decline by 2.5% this year before experiencing a mild recovery of 0.5% in 2010. Romania, once one of the economic high-fliers, is also poised to slow sharply in 2009. After an impressive 7.3% in 2008, we believe GDP growth will plummet to 0.8% this year.