Well, it isn't only in Europe that we are having a hard time of things. Last week Kazuo Momma, head of the Bank of Japan’s research and statistics department, warned that Japan’s economy now faced an “unimaginable” contraction, and today we can begin to see just what the unimaginable might look like, since the preliminary data for fourth quarter GDP are now out. And what we find when we come to stare the unimaginable in the face is that Japan’s economy contracted by 3.3 per cent in the three months to December (compared with the previous quarter), effectively the country's worst economic performance in 35 years.

On an annualised basis, gross domestic product declined at a rate of 12.7 per cent, a number which perhaps better than any other highlights the depth and severity of a slump that has surely now dispelled all those early hopes that the global economy might be able to shrug off the effects of the financial crisis just like that. To puts things in a comparative setting, the contraction was three times as bad as that of the US in the same quarter. Year on year GDP was down by 4.6%. 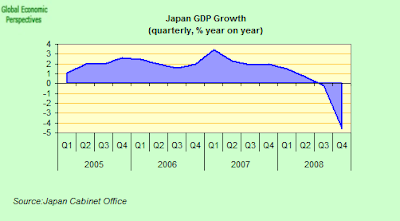 This quarter's big slide in GDP was in fact the second-worst the country has experienced in modern times, lying just a thin hair's breadth away from the record 3.4 per cent quarterly contraction clocked up in 1974, in the wake of the first Middle East oil shock, and well beyond anything Japan's economy has experienced in what is now the "lost decade and a half". 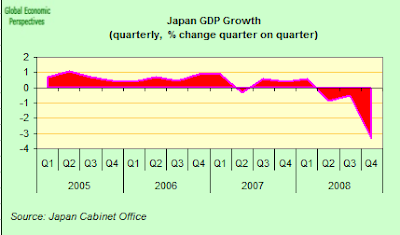 The slowdown was pretty generalised, but lead most decisively by exports which plunged an unprecedented 13.9 percent from the third quarter (see chart below). In fact Japan has become systematically more dependent on sales abroad for growth over the past decade, and overseas shipments make up 16 percent of the economy today compared with about 10 percent in 1999. 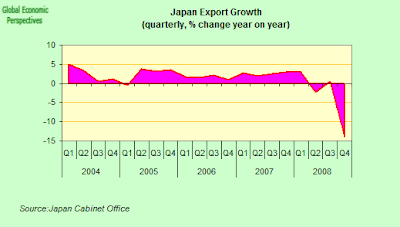 Domestic demand, which includes spending by households and companies, made up 0.3 of a percentage point of the contraction, while capital investment fell 5.3 percent. Manufacturers cut investment spending by a record 11.3 percent in the quarter, indicating they have little need to buy equipment as factories lie increasingly idle. Consumer spending, which accounts for more than half of the economy, dropped 0.4 percent on the quater, as exporters began firing workers.

“There’s no doubt that the economy is in its worst state in the postwar period,” Economic and Fiscal Policy Minister Kaoru Yosano said in Tokyo. “The Japanese economy, which is heavily dependent on exports of autos, electronics and capital goods, has been severely hit by the global slowdown.”

After ten years of sacrifice and reform, it must be pretty shocking for most Japanese to discover that their economy is still in "terrible shape".

And The Worst Is Still To Come


Evidence of Japan’s slowdown can now be found right across the economy. On Monday the country’s electric utilities industry association said that power generation had fallen 6.4 per cent in January as the industrial sector rapidly winds down. This was the sixth straight monthly decline and the steepest fall since a 6.9 per cent drop recorded in July 2005. Even Japan's services sector is suffering, and the new Japan Services PMI, compiled by Markit Economics on behalf of Nomura and published for the first time on the 4th February, showed the country’s downturn deepening in January.

In addition the Nomura/JMMA Manufacturing PMI survey indicated that the goods producing sector contracted at a series record rate in January, in excess of the 22.5% annual decline indicated by official Trade and Industry Ministry (METI) data for December, with plummeting export sales leading the sector’s decline. With both manufacturing and service sectors reducing employment at sharp rates in January, consumer confidence – and therefore household forthcoming spending on both goods and services – looks set to deteriorate further moving into Q1, dragging Japan’s economy deeper into recession. 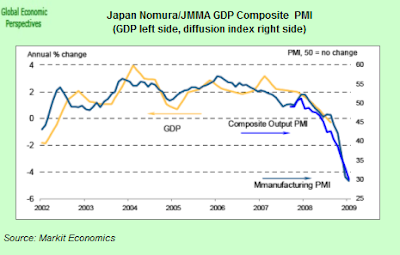 Japan’s consumers remained at their most pessimistic level in at least 26 years in January (see chart below), indicating households are likely to keep cutting back on spending as the recession deepens. The confidence index nudged up very slightly 26.4 from December's 26.2, according to the Cabinet Office last week. December's numbers had been the lowest since the government began compiling the figures in 1982.

Export Dependency Is The Heart Of The Problem

But why is Japan so export dependent? Well here you will find explanations to suit every palate, but if I can just add my 5 cents worth, I would say that the fact that Japan's population currently has the highest median age on the planet is not simply an incidental correlate (nor is the fact that Germany has the second highest median age and is currently struggling with the same problem simply another incidental detail). Basically years of ultra low fertility coupled with relatively unfriendly immigration attitudes means that the median ages of the Japanese and German population (at 43) are now the highest on the planet. Previously it was assumed that we wouldn't see much in the way of economic consequences from all this till much later in the century, but now, to me at least, it is obvious those consequences are already here.

The consequences are, basically, to be seen in very weak domestic consumption growth, which means that economic growth (which is needed to pay all those pensions and health care costs) is totally dependent on exports, and hence the economic well-being of others. And this growth roller-coaster (which can only get worse as the median age rises further) cannot be that much fun for the population at large. One minute you have the best growth in a decade, and the next you go crashing through the floor. Ouch!

So - in addition to the bank regulations fix - something also needs to be done to slow down the rapid ageing of the Japanese and German populations, and as far as I know there are only two ways to do that, get fertility up, and open the doors to immigration.

In this context it is interesting to note that an 80-strong group of economically liberal politicians in the ruling Liberal Democratic Party (LDP), led by Hidenao Nakagawa, a former LDP secretary-general, are pushing for a change in immigration policy (full story in the Economist here). These venerable gentlemen are calling for the number of foreigners living and working in Japan to rise to 10m over the next half century, and for many of these immigrants to become naturalised Japanese. In addition the Keidanren, the association of large manufacturers, is also shifting position, and last autumn called for a more active immigration policy to bring in more highly skilled foreign workers. The Keidanren estimates the present number to be a mere 180,000. The Economist refers to these moves as bold, I would rather term then "baby steps" in the right direction, although we must wait and see what material outcome such pressures lead to, for good intentions have often been expressed in this regard in the past.

As for fertility, again there is a lot of debate about how to encourage people to have more children, and I am sure there is no easy answer here, but I can think of one thing which would help, and that is a change in the national mindset. You see, maybe it isn't true to say that countries like France, the United States and Sweden will have no problems with population aging, but they will certainly have a lot less than many others, since their underlying pyramids are much more stable. And you know what? Few people in these three countries would question the fact that having enough children to maintain national economic stability is important, while in the worst affected countries - Japan, Germany, Italy, Russia, China etc - we find precisely the opposite situation, with few people thinking of the fertility topic as an important one. Indeed many people in very low fertility countries attempt - often vociferously - to deny that long term demography has any economic significance at all. No wonder then, that people in these countries have less children. So when you make your long list of all the lessons which need to be learnt from all the hurting we are just about to get, be sure to remember to add this one.
Posted by Edward Hugh at 5:17 AM