Russia's Economy Declines At An 8% Annual Rate In January

Russia’s economy contracted at an annual rate of 8.8 per cent in January, according to the latest statement by the Russian economy minister. This data point, which provides us with the latest confirmation that a very sharp contraction is now taking place in Russia, follows last week's announcement by economic development minister Elvira Nabiullina, economic development minister, that the economy shrank by 2.4 per cent between December and January. Industrial production also fell 16 per cent year-on-year in January, while there was a 17 per cent decline in construction.

It also gives us some indication of the viability of VTB’s Russian GDP Indicator (as posted here) which indicated a year on year rate of contraction of 4 percent in January, down from December’s 1.1 percent decline, and November's 2.1 percent expansion. This is somewhat under the actual reading, but it is an estimate in real time (we got this at the start of February) and it was by far the nearest estimate I have seen. The Russian government is currently forecasting a contraction of only 2.2% for this year, which has to be way, way too optimistic as things presently stand. 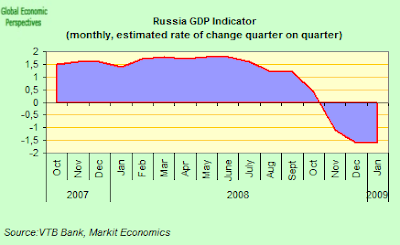 In its official estimates, the economy ministry said the global downturn was filtering deeper into the real economy and had begun to weigh heavily on ordinary citizens.

"Among the negative consequences of the deepening crisis, we can now count a notable drop in the population's real income growth (6.7 percent), increasing unemployment and, as a result, falling consumer demand," the ministry said. "The most important reasons for the economic fall of January 2009 is the significant fall in industrial production, the decline in investment activity, a drop in construction and slowing consumer demand."

Among the hardest-hit segments, the ministry cited fertiliser producers, which cut output by 42 percent, while tyre producers reduced their output to almost zero. Car production also fell, by 80 percent, and the ministry cited lack of cheap car loans amid a general decline of personal income and excessive production in 2008. Retail sales and agriculture still remained in positive territory areas which were still growing - at 2.4 percent and 2.6 percent respectively - although they are already down sharply and there is evidently more to come. 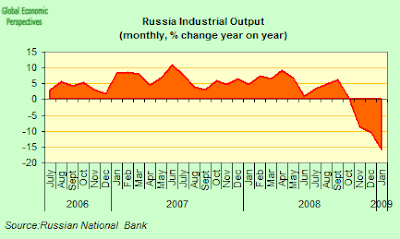 Exports fell more than 40 percent to $20.2 billion as the country exported less oil and gas at lower prices, while imports fell by a third to $10.3 billion as a 35 percent rouble devaluation, which continued throughout January, started hitting importers. Consumers of heavy machinery reduced purchases of foreign equipment by 47 percent and food and chemical imports fell by 25 and 29 percent, respectively.

Russia’s unemployment rate rose to 8.1 percent in January, the highest since March 2005. The total number of unemployed rose by 300,000 in the month to 6.1 million people, or 8.1 percent of the working population. This follows an 800,000 rise in December. 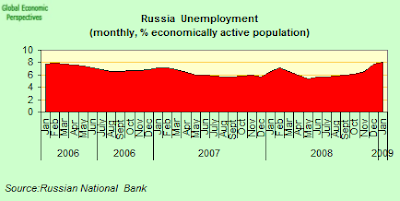 Rising unemployment is the “biggest problem” and the “biggest pain” for Russia as it goes through its worst economic crisis in a decade, President Dmitry Medvedev said in an interview on state television on Feb. 15.

All of this, of course, has quite serious implications for Russia's public finances, and the budget deficit is now projected to reach 8% of GDP in 2009, according to Nabiullina, who said the figure took into account so-called quasi-budgetary expenditures in the form of subordinated loans to business, which would (in principle) be repaid at a later date. The federal budget for 2009 originally set expenditures at 9.024 trillion rubles ($250 billion at current exchange rates) and revenues at slightly over 10 trillion rubles ($277 billion), but the drop in oil prices has cut the expected income dramatically.

The budget was based on an average oil price of $95 per barrel for the year, but is being recalculated based on a figure of $41 per barrel.
Posted by Edward Hugh at 5:42 AM