China’s manufacturing contracted for a sixth consecutive month in January as shrinking global demand hit the country's export-driven economy. The CLSA China Purchasing Managers’ Index rose to a seasonally adjusted 42.2 from 41.2 in December. Since any reading below 50 indicates contraction, even though the rate of contraction dropped (and has been dropping since November, see chart below) China's manufacturing sector (and hence China's economy) is still contracting. What we don't know at this point is how quickly China GDP is contracting, we won't know that till someone with the time and ingenuity devises a way to calculate a rough and ready quarter on quarter (seasonally adjusted) output indicator. Come on, be famous for a day, go out and do it (since the Chinese statistics office apparently have no interest in the matter), I would, but I simply don't have the time, since Europe, not China, is my focus. However, on a rough and ready, back of the envelope, basis my guess is that this months Chinese reading may be equivalent to something like a quarter on quarter contraction rate of around 0.5%, which means that what we have at this point is a 2% annual contraction rate, but we really need to see some actual data to calibrate all this a bit better I think. 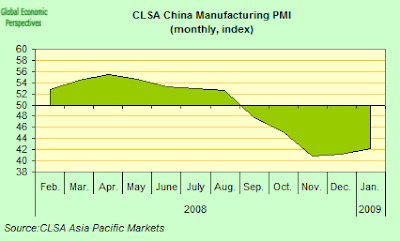 In the CLSA survey, output index rose to 39.7 from 38.6 (which had been a record low) in December. New orders were up to 39.9 from 37. The index of export orders rose to 36.3 from 33.6. So the situation was better in January than December, but it is SO important to remember that these sub-components all indicate ongoing contraction.

My guess is that Chinese companies are squeezing costs and margins as far as the lemon will take it, since there is little evidence of any uptick in aggregate global demand for manufactured products, au contraire. My guess is also that they are grabbing market share by entering the supply chain in places they haven't been before. For example, Hafei Aviation Industry Co., China’s second-largest listed aerospace company, surged to its highest level in almost six months in Shanghai trading this morning after the announcement that it had formed a venture to supply composite-material components to Airbus SAS.

Airbus plans to give 5 percent of the work making parts for A350 airframes to Chinese companies in a bid to win market share in the world’s second-biggest aviation market. The planemaker has also opened an aircraft assembly line in China, its first outside of Europe.

Harbin Hafei will start production in September, and it plans to open a new plant by the end of 2010, Airbus said. Hafei, Avichina Industry & Technology Co. and Harbin Development Zone Heli Infrastructure Development Co. will each hold 10 percent of the venture. Harbin Aircraft Industry Group Co. will own a 50 percent stake. Airbus will have a 20 percent stake.

Chinese manufacturers also shed jobs last month at the fastest pace since the survey began in 2004, with the employment index falling to a record low of 45, so obviously as workers lose their jobs internal consumption is also affected, and we clearly have worse to come in the immediate future.

Chen Xiwen, a senior rural planning official, estimated that about 20 million migrant workers had lost their jobs because of the nation’s economic slowdown at a press briefing in Beijing today.

More than 20m rural migrant workers in China have lost their jobs and returned home as a result of the global economic crisis according to government figures, raising the spectre of widespread unrest in the authoritarian country. By the start of the Chinese New Year Spring Festival on 25 January, 15.3 per cent of China’s 130m migrant workers had lost their jobs and returned from manufacturing centres in the south and east of the country to their home villages or towns, according to Chen Xiwen, Director of the Office of Central Rural Work Leading Group, who was quoting a survey from the Ministry of Agriculture.

Government figures show that in recent years 6m to 7m new rural migrant workers a year have poured out of the countryside to fill the factories, construction sites and restaurants of the booming cities, which means the government must actually deal with as many as 27m new jobless in the countryside. On top of that, a survey by a government think-tank in December estimated 1.5m recent tertiary graduates in China were unable to find work by the end of November and universities and technical colleges are expected to churn out another 6.5m graduates this year. According to rough official calculations one percentage point of Chinese GDP growth creates around 1m jobs.

Chinese Premier Wen explicitly declined to rule out a devaluation of the yuan in an interview with the Financial Times today, although , he said that for the moment the government was content to keep the currency stable at what he considered to be a balanced and reasonable level.

Asked if China bore any responsibility for causing the financial crisis, as a number of economists believe, he stiffens and says in a low voice: “It is a ridiculous view.” But he makes it clear that Beijing will do whatever is needed to maintain growth at “about 8 per cent” this year. “Running our own affairs well is our biggest contribution to mankind,” he says. If necessary, some of the country’s huge stash of foreign currency reserves could be put towards this endeavour – a new plan to enable the use of reserves for domestic purposes is under discussion, he says.

“We must take forceful steps. Under special circumstances, necessary and extraordinary measures are required,” he says. “We should not be restricted by conventions. Success or failure depends on the pace and intensity of those measures.”

Mr Wen refuses to make an explicit commitment not to devalue the Chinese currency during the crisis – as the government did after the Asian financial crisis in 1997, a pledge that helped engineer the eventual recovery and won China a lot of prestige. But he does rule out any big shifts in the value of the Chinese currency.

“I want to make it very clear that maintaining the stability of the renminbi at a balanced and reasonable level is not only in the interests of China but also the interests of the world,” he says. “Many people have not yet come to see this point that if we have drastic fluctuation in the exchange rate of the renminbi, it would be a big disaster.”